Did the carpenters union hire scabs? 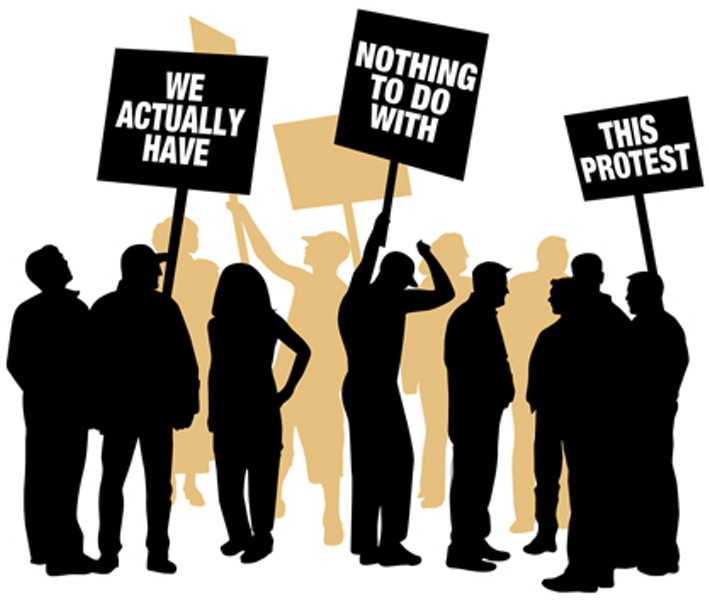 Cleveland has an interesting union history. Long before Bill Presser helped wrest control of the Teamsters Union from the Irish, he was involved with the glass workers union, helping maintain the members' employment by heaving bricks through the windows of area retailers.

Labor issues can be almost as wacky today. One of the more unusual twists on union demonstrations has been taking place in downtown Cleveland and on West 25th and Lorain. The carpenters union (United Brotherhood of Carpenters and Joiners, Local 212) claims to be involved in a labor dispute, though no one has been able to explain why, other than vague tales of bad workmanship, non-union workers, illegal aliens and/or Amish working secretly in the middle of the night and the like. But neither the men on the line nor those answering the phones at union headquarters can provide any specifics.

Even more interesting is who the demonstrators are. I had assumed that the men and occasional women who hold the banner are carpenters out of work at the height of the construction season. My heart went out to them, knowing they are being paid minimum wage as demonstrators, approximately a third of what they would get on a job site. (I have always been a union member whenever possible. In the past, I have belonged to the Newspaper Guild and the Retail Clerks Union. Currently, I am in the Authors Guild and Writers Guild of America.)

Then I noticed something unusual about the lines: Almost everyone was black. "Where are the white guys?" I asked, concerned that I was seeing a return of the union racism that was part of Cleveland's post-World War II history. In the 1950s, white carpenters were dispatched to job sites first. Only after every available white man was employed would black carpenters get work.

So I wondered if white carpenters had been sent to higher-paying job sites. "Where are the white guys? Are they on the job sites making real money?" I asked.

The demonstrators seemed bemused by my righteous outrage. Finally one admitted, "We're not carpenters."

This made no sense. Unions do two types of picketing. The first is the strike line. The second is informational. The latter takes place when an effort is being made to unionize the employees of a business. The demonstrators walk as close to the business as allowed by law, usually on the sidewalk near but not blocking the entrance. Their signs and their flyers explain in detail why they are seeking to unionize the employees. The pickets are trained to explain the problem, hoping the public will put pressure on management to allow the workers to organize.

The carpenters union claims it is not picketing, but rather "bannering." This is semantics: Bannering is essentially informational picketing. But in this case, no one demonstrating is able to explain why they are there. And the reason? The men and women with the banners are not union!

This is where the madness of what is taking place becomes evident. The carpenters union apparently has all its members happily employed at good union wages, with good union benefits. But it seems as if leadership has decided to create a non-issue to demonstrate over and used members' dues to hire scabs. The people holding the banners and passing out flyers were hired off the streets. Many live or have lived in homeless shelters. One man commented that if he wasn't passing out the flyers, he'd have to turn to crime and couldn't feed his family from jail.

They're being paid, but they are not receiving benefits — which is ironic, considering that the flyers they're handing out criticize contractors for not providing benefits to contractors.

And so, in this latest chapter of Cleveland labor history, we have carpenters union leadership paying for a long-term demonstration by people who are not members of the union and not even in the building trades. The union is using member dues — if there is another source of money paying for this, no one has revealed it — to hire people off the street at minimum wage with no benefits. If true, this means that a union has hired scabs — a first in Cleveland labor-union history.