Ernest Dickerson digs up an undead Snoop Dogg and every horror cliché he can find. 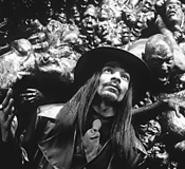 If you're looking to see Snoop Dogg kick some boo-tay, as an undead drug dealer with lycanthropic tendencies in Ernest Dickerson's new horror movie Bones, you'll have to wait at least an hour before the dead guy's body gets up and about again. And when it finally does happen, the killings are often abrupt and sudden, symptomatic of the movie itself. Full of fits and starts, it never really gets going, stalling at every turn without even giving us enough of what we paid to see -- Snoop Dogg and gore.

Things start out promisingly enough, as green filters cover the camera lens and two dopey rich white guys with cell phones find themselves on the bum end of a drug deal gone wrong. Trapped in the 'hood, they run toward a house that looks a lot like He-Man's Castle Grayskull on the outside and the house from the opening sequence of Tales From the Crypt on the inside. (Dickerson previously directed Tales From the Crypt Presents: Demon Knight, a funnier and scarier romp that ended with a Snoop look-alike in black trench coat and fedora strolling off across the desert; Bones could almost be its sequel.)

It's clear this house isn't going to provide sanctuary. It scares cops away and proves to be the residence of a big black dog with glowing red eyes, not to mention Snoop-shaped shadows that creep along the walls. The unfortunate twosome is soon gushing torrents of blood, and the film flashes back to 1979 and what appears to be a Spike Lee Joint, complete with titles that even recall Lee, for whom Dickerson was cinematographer for a decade. We roll down the same street in sunshine with Jimmy Bones (Snoop Dogg), a high roller who may be a pimp or a drug dealer (it's never made entirely clear, presumably to maintain a semblance of sympathy for the character). By the time the overlong credits finally end, we've moved up to the present day again; Castle Grayskull, we discover, is Jimmy Bones's crib, and something bad happened there. Enter the obligatory stupid kids, who insist on messing around with the most obviously haunted spot in the entire neighborhood.

You've got to feel for kids too dim to realize that a house infested with flies, containing a corpse in the basement, and guarded by a large angry dog is not the perfect place to build their new nightclub. Yet despite warnings from Pam Grier, as the run-of-the-mill neighborhood psychic nutball, the trio of clowns build their club, even taking the black dog home as a pet, where they feed it raw steak. They even sleep in their newfound digs, despite disturbing dreams of hell and blood and so forth. Female lead Bianca Lawson has a very convincing dream in which she's raped, yet comes back a couple of days later. (The whole rape sequence makes no sense, given that Bones was obviously her father and has no reason to do that, but whatever.)

The screenplay borrows every trick from the '80s horror playbook. Jimmy Bones, like Freddy Krueger, visits the dreams of the children of those who murdered him. Like the stepfather in Hellraiser, he can be revived by absorbing the blood of his victims (it bears mentioning how fake the blood looks, which is much more '70s). Like the Crow, he's a man done wrong who returns for vengeance with an animal spirit guide. Like Darth Vader, he's the father of one of our heroes (the film treats this revelation as a surprise, though it's obvious as soon as the characters appear onscreen). There are also more recent rip-offs: one from The Matrix and one straight out of Scary Movie, in which a severed head continues to make sarcastic wisecracks.

Bones should be much better than it is. Demon Knight is an underrated cult classic, and co-scribe Adam Simon is responsible for the deliriously weird Roger Corman productions Brain Dead and Carnosaur. And Snoop Dogg has commanding screen presence. He shined in John Singleton's Baby Boy and exhibited similar charisma in Training Day; as a rapper, he's a superior movie-star-in-the-making. Sadly, Jimmy Bones in flashbacks feels like Snoop playing dress-up; as a ghost, he isn't given enough to do. It doesn't help that the soundtrack is loaded with Snoop songs in which he name-checks himself numerous times, which kills that whole suspension of disbelief thing. (It's reminiscent of the film Gridlock'd, in which Tupac Shakur's character sports tattoos that clearly read "2Pac.")

Early on, Pam Grier utters the suggestive line, "Some holes can't be filled, and some hungers can't be satisfied." If your hunger is for good ghost stories, she's absolutely right. There still may be a great urban horror movie to be made -- say, a Candyman that doesn't depend on a white protagonist. This just isn't it.