Ensemble Theatre takes a Long look back at a classic. 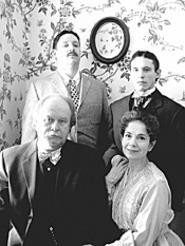 Ensemble Theatre's celebrating its 25th anniversary by returning to its roots. The collective was founded to stage the works of Eugene O'Neill, and this week it presents the playwright's Long Day's Journey Into Night, one of American theater's most acclaimed works. "It's the cornerstone of American drama," says director Licia Colombi. "It's the great American play."

It also holds a bit of personal history for Colombi. "I [starred in] a production at Kent State around the time the riots were going on," she explains. "It's been a great joy to revisit it after all these years."

The story of the Tyrone family (subbing for O'Neill's own thinly disguised brood) is the mother of all dysfunctional-family dramas. It comes complete with a pill-popping matriarch, an alcoholic father, and a real fuck-up of a son. "It's amazing how timely it still is," says Colombi of the 60-year-old play. "The dysfunctional family never goes out of vogue." Long Day's Journey Into Night is at the Cleveland Play House's Studio One (8500 Euclid Avenue) Saturday through March 13. Show times are 8 p.m. Friday and Saturday and 3 p.m. Sunday. Tickets are $20 to $24, available by calling 216-321-2980. -- Michael Gallucci

Field of Schemes
Playwright finds something rough on the diamond.

As Richard Dresser toyed with the first draft of his baseball play Rounding Third, he recalled his son's Little League team's game plan: When a slow runner reached first base, he'd get a signal to slide to second and pretend to be hurt. A faster player would then replace him. Some teammates called it cheating; the coach called it "strategy." "How many future Enrons are brewing on our Little League fields and in our school gyms, under the watchful eyes of overzealous coaches?" asks Dresser. "Writing the play reflects my own conflicts about how we raise our children in a culture so ruthlessly obsessed with material success." Rounding Third is at the Cleveland Play House's Drury Theatre (8500 Euclid Avenue) Wednesday through March 27. Show times are 8 p.m. Tuesday through Friday, 4 and 8 p.m. Saturday, and 2 and 8 p.m. Sunday. Tickets are $34 to $49.50; call 216-795-7000. -- Cris Glaser

Les Ballets Jazz de Montréal bills itself as "ballet with an edge." And seeing that the 30-year-old, 15-member Canadian troupe mixes jazz and modern dance with traditional ballet choreography, we have little reason to doubt that. Besides, the group -- unlike many of its stern, serious peers -- seems to enjoy working humor and imaginative moves into its pieces. Lately, it's been dancing works by contemporary choreographers Crystal Pite, Edgar Zendejas, and Rodrigo Pederneiras, who stage productions that are as much fun to watch as they are for the dancers to perform. Les Ballets Jazz de Montréal is at the Ohio Theatre (1519 Euclid Avenue) at 8 p.m. Friday. Tickets are $15 to $35, available by calling 216-241-6000. -- Michael Gallucci

At Friday's Brazilian Carnaval Celebration, revelers are encouraged to dress in costume, while they shake their bodies down to the ground to the music of Pimenta Malagueta. There's also a samba dance contest, the Batacuda Drummers, and strolling performance artists, who'll wander the club in search of folks to dance with. It starts at 9 p.m. at Modä, 1871 West 25th Street. Tickets are $20; call 216-280-0407. -- Michael Gallucci