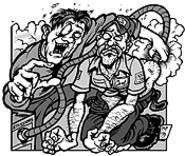 As Keith Eckmeyer recalls it, the whole thing started with an experiment. "My buddy called the county and asked 10 questions," says the 42-year-old Kent resident. "Then I called and asked the same 10 questions. We got totally different answers."

That was four years ago. Since then there have been civic resolutions, community meetings, public protests, and testimony before legislative committees. And some things have changed. Modifications have been made, money spent, objections duly noted.

But at this point it's doubtful anything short of unconditional surrender could satisfy Eckmeyer, a former machinist who retired years ago after a debilitating back injury. After all, as Eckmeyer sees it, E-Check, the automobile emission testing program that's become his white whale of a nemesis, isn't just annoying -- it's illegal, and no less than an affront to truth, justice, and Chevrolets.

When E-Check was first implemented in 1996, the program claimed a prominent place in the pantheon of irritating government initiatives, even though it sought to accomplish a worthy goal. Enacted by the Ohio General Assembly as a way for the state to reduce air pollution as mandated by the 1990 federal Clean Air Act, E-Check was something people loved to hate.

Part of the problem was its inequity. Only 14 of the state's 88 counties would eventually become part of the program, including all 7 of the counties that compose Greater Cleveland, along with counties in the Dayton and Cincinnati areas. In Northeast Ohio, much of the grumbling came from county and municipal governments throughout Portage, Medina, Geauga, and Lake counties; they argued they were footing the bill for Cleveland and Akron's crappy air.

Part of it was the process. Long lines and damaged cars were common complaints. In non-E-Check counties bordering the ones where testing was required, vehicle registrations jumped, from people fleeing the hassle. The number of people applying for collector plates, which, at the time, were exempt from E-Check, jumped nearly 300 percent from 1995 to 1996.

Over time, however, most car owners settled into a reluctant truce with the program. Long lines at testing stations shortened. Press scrutiny waned. The number of complaints declined, especially since a shorter and less intense testing procedure was adopted last year. (Another new test will be implemented in the spring of 2000. Accelerated Simulation Mode 25/25 is similar to the current "quick test" being used, but will take a little longer. )

"By nature, these programs are fraught with controversy," says Steve Milburn of Envirotest Systems Corporation, the company that holds the contract to run Ohio's E-Check program through 2005. "But a lot of the scrutiny was due to public perception."

Some people, however, never raised the white flag. Among them are Eckmeyer and the organization he leads, the Coalition Against Testing, a group of diehards who see E-Check as more than an annoyance, more than just bureaucratic bullshit that ranks up there with root canals and community theater.

"I'm almost radically conservative," says Ken Sawders, one of CAT's founding members. "Your vehicle is your property and, in a sense, your freedom. When you have people who can't afford to buy a new vehicle, and they're driving an old jalopy, and they can't afford to get it fixed, you're taking away their property. They're telling you that you can't own it."

For years, CAT and its fellow E-Check enemies have been a prominent part of an anti-E-Check jihad aimed at abolishing the program. And while there have been near-misses -- two years ago, the state legislature passed a bill that would have replaced E-Check with a simpler tailpipe test, only to be vetoed by then-Governor George Voinovich -- success has most often come in small doses. The most recent proposal to modify the program, introduced in September by Representative Ron Young, a Republican from Leroy, would exempt cars less than five years old from having to get tested.

Now a showdown of sorts may be on the horizon. A year ago, Timothy Grendell, an attorney who's married to Republican State Representative Diane Grendell -- another avowed opponent of E-Check -- filed a class-action lawsuit against the Ohio Environmental Protection Agency in Summit County Common Pleas Court on behalf of himself, CAT, and a bevy of others who want E-Check to go the way of the carrier pigeon.

Among other things, Grendell is arguing that the "sharing of revenue" from the program, namely the $2.50 cut that the Ohio EPA gets from the $19.50 testing fee, violates a provision of the state constitution barring state agencies from becoming partners with private enterprises. The suit argues that the contract also violates the state constitution, because the liability incurred if the contract were ever broken "is effectively a . . . guarantee by the State of Ohio of Envirotest's private contract profits."

"The bottom line is this: It's a violation of the Ohio constitution," insists Eckmeyer. "And [OEPA and Envirotest] know it's a violation."

Attorneys for Envirotest and the OEPA have, not surprisingly, called those assertions balderdash. Just because OEPA gets some money to oversee the program doesn't mean it's involved in a joint venture with Envirotest, they argue. Similarly, the liability the state could incur if the contract were broken -- potentially in the tens of millions -- isn't a guarantee of profit, but simply a protection for potential damages, providing "the same measure of damages that ordinarily would be provided under common law for breach of contract," according to Envirotest's lawyers.

Both sides have submitted motions and arguments for summary judgment, which Judge Patricia Cosgrove is scheduled to discuss in a meeting with opposing lawyers early next month. She could decide the matter shortly thereafter.

If the lawsuit fails, there aren't many options left for groups like CAT. After so much work -- at one point Sawders was going to three or four public meetings a week, in addition to regular meetings with other CAT members -- it's hard to imagine what else can be done. Sawders himself hasn't been involved in the E-Check battle for a couple of years, partly because he got a new job, he says, but partly because it became increasingly difficult to justify taking time away from his family to pursue such a quixotic undertaking.

"It's something that affects everybody," he says. "Everybody drives. But with the apathy we saw, it was futile for me after awhile. I still believe E-Check is wrong. But the apathy in our area to let government roll over your rights really disappointed me."

There won't be any such rest for Eckmeyer. "The majority of Ohioans have lost all hope," he declares. "The biggest things, these days, in 1999, are accomplished by just a few people. I do not want to give up on this until I die. I can't live with a lie."

Andrew Putz can be reached at aputz@clevescene.com.