There's 12 inches and more at the National Record Show. 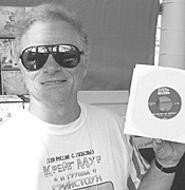 Just because your local FYE doesn't stock vinyl doesn't mean there isn't a market for 12-inch LPs, 7-inch 45s, and 10-inch 78s. This weekend's National Record Show at the Rock Hall offers thousands of reasons why antiquated slabs of wax still matter. "There's been a resurgence of record labels releasing vinyl," says Gregory Loescher, editor of the record collector's bible, Goldmine, which is presenting the show. "A lot of them got out of it for a while, but they're going back into it now." Approximately 40 booths will be stuffed with records, CDs, and music memorabilia. "We're gonna have imports and other [specialized items]," Loescher says. "Your average music fan, who doesn't dig around and hangs out at Kmart, will find some phenomenal stuff." Live music will be performed by Poobah, Glass Harp, and others. The National Record Show takes place from 10 a.m. to 9 p.m. Saturday and 10 a.m. to 5:30 p.m. Sunday at the Rock and Roll Hall of Fame (1 Key Plaza). Admission is free. Call 216-515-1930 for more info. -- Michael Gallucci

The folks behind the Ohio Independent Film Festival are throwing a 10th-anniversary bash Saturday. But Summer Crush is about more than just movies -- though a bunch of short films and music videos will be screened, and short-film director Ryan McFaul (whose work includes the ukulele-sporting Ukes of Hazzard's "Gay Boyfriend" video) will be there. It's also about DJs and live music -- the Scotland Yard Gospel Choir, Kiddo, Coffinberry, and Slunt (pictured) perform -- food, and prize packages. It's a fund-raiser for artist-friendly Independent Pictures, which presents the annual film fest and also offers training programs and workshops to budding filmmakers. Summer Crush starts at 7 p.m. at the Odeon (1295 Old River Road). Tickets are $20 and $25, available by calling 216-651-7315. -- Michael Gallucci

When the U.S. Supreme Court ruled that laws banning gay sex are unconstitutional, Kevin Cathcart was the first to claim victory for the gay community. The executive director of the Lambda Legal Defense and Education Fund will talk about how his group persuaded the highest court in the land to rule in favor of Lawrence vs. Texas. "[The laws] have labeled the entire gay community as criminals and second-hand citizens," he says. "The Supreme Court ended that once and for all." Cathcart speaks at noon on Friday at the City Club, 850 Euclid Avenue. Admission is $15-25; call 216-621-0082. -- Cris Glaser