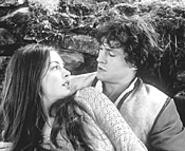 Fairy tales are odd little beasts, as they're supposed to plunk us into fantastic worlds while also conveying some universal truths inherent under the surface of our big, boring, loud, violent, obnoxious world. But they've also become fodder for "re-envisioning," which increasingly means "mucking up with excessive cheekiness." Ella Enchanted falls into this campy category, but it also offers considerable charm and an earnest desire to please. Like a lapdog in a DayGlo sweater, its presence is amusing over a finite span, and kicking its squeaky little ass out the door would only make you feel guilty.

Besides, Ella Enchanted is designed for young girls and the girlish at heart, who should find it engaging and fun. Our princess here is Ella of Frell (hyper-earnest Anne Hathaway of The Princess Diaries, growing up fast), a Cinderella type who gets saddled with a couple of nasty stepsisters when her father remarries. As her new stepmother is the bitchy Dame Olga (Joanna Lumley), Ella needs a change of scenery, thus this adventure.

The crux is that Ella suffers what she calls "the curse," but it's probably not what you're thinking: She was given the "gift" of complete obedience by a fairy named Lucinda (Vivica Fox), and therefore has no choice but to do exactly as she is told. The steps torment Ella by making her steal items from the zany Frell Galleria, which ends in mayhem and arrest, leading her to seek counsel. Ella's freckly and quasi-mystical nursemaid Mandy (Minnie Driver) consults her smarty boyfriend Benny (Jimi Mistry), and the plan emerges: Ella must, like, go off questing for her own autonomy, or something.

Along the way, Ella deals with strange characters, encounters The Love Interest (in this case the socially conscious Prince Charmont, played by Hugh Dancy), and confronts the mildly evil but none too threatening Sir Edgar (Cary Elwes of the similarly toned The Princess Bride).

The script weaves erratically from giggle to girl-power to Shimmering Emotional Moment without much sense of urgency. The adaptation of Gail Carson Levine's award-winning novel adds glaring anachronisms but is otherwise strictly by-the-numbers. Coming out on top, however, is director Tommy O'Haver, who makes a quantum leap from his previous works (Billy's Hollywood Screen Kiss, Get Over It) to helm this colorful extravaganza.