The Benchwarmers put a zero on the board. 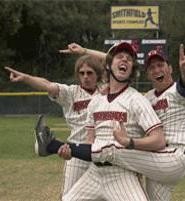 Believe it or not, The Benchwarmers is so lame that it can't even lay claim to being the best Adam Sandler-produced movie not screened for critics in 2006; that dubious honor would go to Grandma's Boy, which was by no means good, but at least featured a kung-fu chimp and naked breasts. Maybe you were hoping that the presence of Napoleon Dynamite's Jon Heder would amp up the game of the usual gang of Happy Madison idiots (Sandler pals Rob Schneider, David Spade, director Dennis Dugan, and screenwriters Allen Covert and Nick Swardson). You'd be wrong: Heder, who's a clean-living Mormon in real life, does claim to have softened some of the raunchier humor, but all that means is that sexual fluids aren't the subject of any jokes here. Every other bodily emission is fair game.

So if jokes about farting in people's faces, graphic scenes of vomiting, gratuitous references to urination and spitting, and Heder picking his nose throughout the whole movie sound amusing to you, this might be your idea of fun. On the other hand, you could just try baby-sitting a toddler or two instead. You'd get all the bodily functions, plus a sense of humor that's better developed than Dugan's.

Heder and Spade play Clark and Richie, hopeless nerds who aren't even good at their relatively unchallenging jobs. Clark's a paperboy, never seen without his bike helmet, who still lives with his mother and gets excited about macaroni for dinner. Richie, whose hideous bowl haircut vaguely resembles a bike helmet, is a video store clerk who recommends lesbian porn to female customers. Their friend Gus (Schneider) is a landscaper who appears to be a nerd, but when challenged to a baseball game by some obnoxious kids, proves to be really good at it. Indeed, he's not in the same league as his friends -- he has a beautiful wife and a past he's ashamed of for various reasons. This isn't that different from, say, David Spade in real life; Richie may be a thirtysomething virgin, but Spade has dated the likes of Kristy Swanson. In other words, kids, he ain't one of you, but he gets his fame pretending to be, which turns out to be Gus' major dilemma in the movie.

After beating the obnoxious kids, Gus, Clark, and Richie are challenged by the boys' obnoxious parents, fronted by the smarmy Jerry (Craig Kilborn). When Gus stands up for his buddies, it catches the eye of local bazillionaire Mel (Jon Lovitz), a guy so geeky he collects life-size Star Wars figures and owns the original Adam West Batmobile. It's his idea to form a team of apparent losers called the Benchwarmers, to give the kids who never get to play ball a chance to be in the game. With a brand-new stadium at stake, he sets up a tournament pitting the three adults against full teams of obnoxious kids with even more obnoxious parents.

If the idea of a team of misfit nerds coming together to play baseball seems familiar, it might just be because there's already one remake of The Bad News Bears, and it's a whole lot funnier than this inept, inbred knockoff.

Look, it's not like Happy Madison Productions has ever set the bar all that high, but even based on the low expectations a viewer might have, after The Waterboy, The Animal, or Dickie Roberts: Former Child Star, this film disappoints.