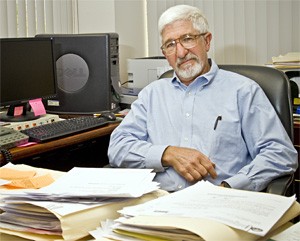 Frankie Hamilton vs. The Ohio Savings Association was one of the longest-running cases in state history.

In the early 1980s, Francine Hamilton discovered that the bank was overcalculating the interest on her mortgage — and was doing the same to hundreds of others. Though individual customers took a barely noticeable nick, it amounted to a lucrative skim for the bank when spread across its mortgage portfolio.

Hamilton filed suit in 1985. But navigating the morass of the state judicial system would take 22 years before Ohio Savings finally settled for $14 million in 2007.

For her lawyer, Steven Weiss, the long-awaited victory was short-lived. Only a few weeks later, Beachwood lawyer Edward Siegel filed a motion to block the payout. The settlement, he noted, would pay Weiss more than $5 million, while customers only got $60,000 apiece.

In Siegel's eyes, it was a classic case of legal plundering.

He's what's known as a professional objector. They're lawyers who make their money challenging settlements in class-action suits. Their role, ostensibly, is to make sure lawyers aren't screwing their clients with agreements that charge exorbitant legal fees. After all, class-action suits are ripe for rip-offs.

Once a case is settled, competing lawyers suddenly have a mutual interest: They just want it over with. But defense attorneys don't care how the money is distributed. Their concern is the final total — and not getting sued again.

That chumminess allows plaintiffs' lawyers to get creative, sometimes writing in their own fees worth 40 to 50 percent of the total payout. That money, naturally, comes directly from their clients' pockets.

So people like Siegel sweep in, essentially to protect plaintiffs from their own lawyers, serving as the salt that repels the leeches from their skin.

"In theory, the system works," says Theodore Eisenberg, a law professor at Cornell. "In practice, no, it doesn't."

To the rest of the bar, objectors aren't Robin Hoods. They'd be more inclined to use the term "shakedown artists." Objectors jump into cases long after settlements are agreed upon, they say, only to raise last-minute issues in hopes of generating easy fees of their own.

When an objection is filed, the payout is inevitably delayed. And unless a deal is worked out, the case is once again thrown into the court system, where it can languish for years. So a large percentage of lawyers opt for the pain-free solution: Kick the objector some side money, so he — and his objections — goes away.

"The larger the settlement, the more cost-effective it is to pay the objectors, rather than suffer the delay of waiting for an appeal to be resolved," explains U.S. District Judge Nancy Gertner. "Because of these economic realities, professional objectors can levy what is effectively a tax on class-action settlements — a tax which has no benefit to anyone other than the objectors."

Which leaves Edward Siegel, one of the nation's most prolific serial objectors, not exactly popular among members of the bar.

He entered the field four years ago, when his sister received notice saying she was eligible for a settlement. In 2003, FirstEnergy shareholders sued the company, claiming illicit deeds ranging from misleading disclosures to illegal accounting. A separate suit accused officers and directors of negligent management. The company settled.

But the notice Siegel's sister received could have been written in Togolese. She asked her brother to explain. In most cases, says Siegel, those who receive such notices merely throw them away.

The two cases had two sets of lawyers, and they were to receive two separate payouts totaling $26.25 million. Siegel believed they were gouging their clients and objected on his sister's behalf.

Rather than risk further fighting, the lawyers agreed to reduce their fees by 3 percent — resulting in a few extra million for shareholders. The Beachwood lawyer didn't receive payment for his work, but he did find his calling. Even if objectors are mostly unsuccessful, it can still amount to a "nice side source of income," says Siegel.

Last year, wireless insurance company Asurion settled a case in which it was accused of demanding unreasonable deductibles and providing shoddy service. Siegel objected, contending the payout was cheap and lawyers were siphoning too much. He then asked for $24,615 for his own work on the case.

The judge wasn't exactly impressed, calling that work "generic." But Siegel was nonetheless granted $4,742 from the settlement pot.

He estimates that 30 percent of his practice comes from objecting, and he revels in his outsider status. "Lots of people don't like me because of what I do," he says. "I see it as a badge of honor."

In Siegel's eyes, class-action lawyers are the true snake charmers. "I'm the one standing up for the little guy," he says. "I've had judges thank me for bringing things to their attention."

One of Siegel's proudest moments involves a Qwest case in Denver. Lawyers accused the telecommunications giant of intentionally inflating share prices. Qwest agreed to settle for $400 million. But attorneys were scheduled to take a $98 million cut. Siegel and other objectors argued that the fee was too high. The court agreed, slashing it to $60 million.

"That meant an extra $38 million went to the class," Siegel says. "I'm quite proud of that outcome. I believe I added to the case."

The judge, however, didn't see it that way. He refused to award Siegel any fees for his work.

In the past two years, he's had a less-than-stellar success rate. A judge in an AT&T suit in New Jersey called his objection "wasteful litigation." In a Texas case against Allstate, his work was deemed "another attempt by objectors counsel to dip into the attorneys' fee trough."

Moreover, his objections in two recent cases contain eerily similar arguments, as if he simply cut and pasted his case together without bothering to change the language.

In the Ohio Savings case, lawyer Weiss viewed Siegel's interference as "frivolous" and asked the court to impose economic sanctions. Siegel withdrew his objection, and the penalty was dropped.

After 22 years in court, Ohio Savings customers will soon receive payment for the bank's deception. But Edward Siegel has already moved on, searching for new shysters among his fellow barristers.