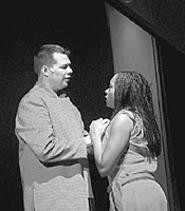 There's hardly a sturdier geometric shape for a romantic story than the eternal triangle. When two love one, simple division indicates that somebody is going to be left holding the bag. And when you factor in different nationalities -- especially countries at war with each other -- the math gets even more complex. So it is with Giuseppe Verdi's opera Aida, which has been enthralling audiences for nigh onto 150 years.

Back in 1998, the folks at Disney Theatrical Productions thought it would be dandy to update that tale of doomed love, and handed it off to rocker Elton John and his librettist, Tim Rice, to conjure their pop-music magic. The result is a bubblegum version that is called Aida, but shares little more than three vowels and a consonant with the original. A largely capable Beck Center cast works diligently to bring this mummified colossus to life, but a sandstorm of banal tunes and too many sitcom-cute gags leave this show far below other musical-theater reinterpretations, such as the magnificent Disney creation The Lion King.

In this retelling, Aida, a Nubian princess captured and enslaved, falls head over sandals for the battle-hardened Radames, an Egyptian captain who has been engaged to Amneris, the daughter of the ailing Pharaoh, for nine years. For various reasons, however, the sharp points of this love triangle are ground down to soft curves, which saps the energy from what should be a searing conflict. When Amneris cops to the idea that her fiancé and servant are an item, she has them both arrested and, in a gesture of mercy, kindly directs that they be buried alive in the same tomb.

The authors of Aida's book (David Henry Hwang, Linda Wolverton, and Robert Falls) chose to turn Amneris into a ditzily superficial egomaniac, which is good for a few laughs: When Amneris meets her new handmaiden Aida, the pampered potentate marvels at the lowly Ethiopian's apparent sophistication, saying "A slave who knows her fabrics? I'll keep her!" But by morphing Amneris into Alicia Silverstone from Clueless, the significance of the developing romantic collision is weakened. Laurel Held-Posey can do nothing else but play it for easy yuks, especially when she beckons to Radames from her bedroom, bellowing "There's a buck-naked princess in bed, calling your name!"

The character of Aida herself is written and played fairly straight, thankfully, and Colleen Longshaw has a few sterling moments in her songs. But she has a tendency to clomp across the stage, belying the grace and stature that would bespeak her royal lineage. She is also unable to spark even a flicker of sexual chemistry with crew-cut Ian Atwood, who plays Radames with all the swagger and intensity of an overgrown junior-high kid at his first gym dance. Although their duets are sung well, under the musical direction of Larry Goodpaster, these two actors might as well be standing in separate buildings, for all the passion they generate.

Of course, a large portion of the blame must go to John and Rice. Even though their melodies have all the trappings of interesting tunes, they quickly merge together into a pasty ball of sameness, and the lyrics are surprisingly flaccid. In "Radames' Letter," the bold warrior burbles, "I'm sorry for everything I've said/And for anything I forgot to say too/When things get so complicated/I stumble, at best, muddle through." One exception is "Another Pyramid," a hard rock, dancing-on-the-Pharaoh's-tomb celebration led by nasty Zoser, father of Radames (he'll be played by a gimlet-eyed weasel in the inevitable animation movie). Kevin Joseph Kelly sneers with gusto as Zoser, sporting the Roddy McDowall haircut from Cleopatra.

Director Scott Spence maneuvers the large cast comfortably around the stage and coaxes a couple of interesting performances out of secondary characters, especially Carlos Cruz as Mereb, Aida's Nubian pal, who keeps her grounded and connected to her people. While some of choreographer Martin Cespedes' dance numbers display fleeting echoes of the lame Egyptian crook-arm dance move (think Steve Martin performing "King Tut"), the Dance of the Robe -- in which the Nubians exalt Aida with a lovingly made patchwork garment -- is an enthralling and spirited exercise.

As for the other garments, the production's costume co-designers, Alison Hernan Garrigan and Jeffrey M. Smart, successfully capture an Egyptian vibe, but the raiment of the leading characters lacks the visual impact one might expect. Scenic designer Don McBride's simple sets, with single colors flooding scrim-covered panels and pillars, convey the pristine expanse of the Middle East. And two pairs of wall units that roll sideways to expand or contract the playing area use isosceles angles that create a pyramid shape in the negative space between them. It's an unintended metaphor for the emptiness at the heart of this dumbed-down classic.