If you like it short, sweet, and offbeat, AtTENtion Span may be for you. 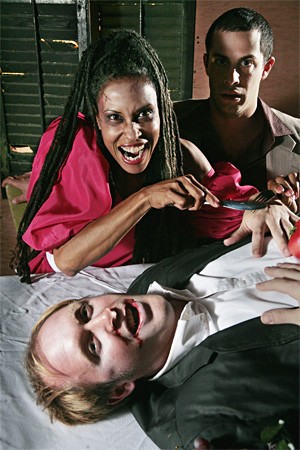 So when the Cleveland Public Theatre billboards its current production as AtTENtion Span: A Festival of 10-Minute Plays, you can certainly quibble with the terminology. There's no such thing as a 10-minute play. But the best comedy sketches can be small works of art in their own right, as proven by Elaine May and Mike Nichols, Monty Python, and the rest. In this series of eight comedic skits, a couple of efforts aspire to those heights. Overall, while they vary in accessibility and wit, the bits are performed with infectious energy by the CPT cast — even when the writing doesn't deserve it.

In the opening "My Date With a Zombie," Saidah Mitchell is a sexy undead chick who puts the rigor in rigor mortis. She visits a zombie café with a normal fellow played by Tom Kondilas, and they seem to hit it off until a barely breathing human entrée is flopped onto their table. Written by Steve Strangio, the jokes are predictable (actual finger food for appetizers, etc.), and there's no punchy ending, but the actors and director Christopher Johnston sweep us up in their spot-on portrayals.

In the most successful effort of the evening, "Find Mucking" by Jamie McGhan, Kunchik and Margi Herwald Zitelli play college women who are lustily attracted to all manner of intellectual arcana, not to mention each other. Ping-ponging obscure concepts, from the intricacies of oxidation to remote literary references, the gals engage in kinky sexual horseplay as their temporal lobes flush and swell. Director Greg Vovos keeps the pacing so taut, none of the sexual or comedic tension goes limp for even a second.

Less entertaining are sketches with promising premises that just don't develop. Mike Geither's "Make Yourself Plain" posits an office environment where two workers (Felicita Sanchez and Shawn Galligan) are busy xeroxing their faces and body parts while intoning a sacred chant. The idea of a copy machine as God is interesting, but the script veers off course as the young man begins fantasizing that he's a warrior/hero/lover of olden days. Perhaps these different threads could have been pulled together in a longer piece, but director Jaime Bouvier can't quite manage it here.

"Henry and Louise and Henri" falls short in a different way, by taking a clichéd situation — the ugly American tourist in a French restaurant — and bringing little that's new to the table. Most of the audience could write funnier lines than author Kathleen Cahill comes up with here, which in the end hangs director Vovos out to dry.

At the bottom of the barrel are "Antarctica (purity)" and "In the Cool, Cool, Cool," each abstract and irritating. The former, a humorless exercise by Anton Dudley, features a postman who, while delivering a package to a couple, shares a homoerotic fantasy connected to nothing. The package contains only a piece of ice from Antarctica (it's a symbol, apparently; if you don't get it, don't feel bad). In "Cool," writer Peter Papadopoulos leads us through a surgical procedure in which the patient dies — and almost kills the evening in the process.

The entire show, as produced by Greg Vovos, is staged in different areas of the theater, with audience members instructed where to point their plastic chairs for each scene. This seat shuffling is gratuitous, since virtually all the "plays" could have been performed in one place. But this periodic rearrangement keeps everyone awake, if not necessarily enlivened.

The final sketch, "Scream," happens high in the balcony of the theater, and it actually makes use of that location. Here, author/director Vovos has imagined a literally drop-dead party for happy fatalists, but the running gag gets tired, and the takeaway (the media, like roaches, always survive) is pretty ho-hum.

All in all, AtTENtion Span is as momentarily diverting as a brisk round of Whack the Weasel. But it can't hold a candle to the real thing.