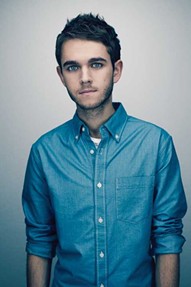 Outside of having an affinity for Daft Punk, electronic musician and producer Anton “Zedd” Zaslavski didn’t have much of an interest in electronic music. All that changed when he heard †, the 2007 album by French electronic duo Justice.

“Justice to me sounded very similar [to Daft Punk] outside of the fact that their production was still some of the best in the world,” says Zaslavski via phone from Las Vegas, where he had just completed a residency at the Wynn hotel club XS. “I still sample their stuff. I wanted to know how to do that. I didn’t know how to make kicks and snares sound that good. That’s what got me going and wanting to be better.”

[jump] Now one of the best-known electronic musicians in the world, the Russian-born Zaslavski grew up in Germany where his parents gave music lessons and played concerts on the side. He learned top play piano when he was four.

“I was horrible at reading music,” Zaslavski recalls. “I would pretend I could read it. I just memorized every single piece instead of reading it. I think that is better, by the way, because you can focus on the emotion more.”

When he was 12, he stopped studying classical music and formed a rock band with his brother.

“I still played piano and wrote music, but I didn’t go to weekly lessons,” he explains. “We started producing other artists. One day, I discovered my interest in electronic music and started doing it just for fun. I thought my band would be the main music.”

Well-versed in how to record music — Zaslavski produced his own band and other bands too — he took to electronic music quickly.

“By the time I started making electronic music, I had played two instruments, written dozens of songs and recorded other bands,” he says. “The other thing I had to figure out was how to use those synth sounds and what plug-ins to use. I didn’t even go out. I was a semi-shy guy who would sit at home and not really go out. I didn’t know about the DJ world. Part of that was maybe the reason why I sounded different from anyone else. If you know too much, you start thinking about things a musician shouldn’t think about it, like is this going to work and is the crowd going to jump. I didn’t know about extended mixes and that DJs needed those extra 30 seconds to mix other music in.”

He issued a series of singles before signing to Interscope Records and releasing his full-length debut, 2012’s Clarity. That album delivered the crossover hit “Clarity,” a soaring pop anthem that features the British singer-songwriter Foxes on vocals.

“I’ve doing albums in the rock world before so that helped with the understanding of the flow of the album,” he says when asked about the process of making Clarity. “Everything I’ve done was for the first time. It was all in my hands and I didn’t know how to do transitions right. It was about making an album which means you have to have songs that bring the energy down. There’s much more than just focusing on one song at a time. I really enjoyed it. When I finished the album, I just wanted to make another one.”

This year, he followed up Clarity with True Colors. The album has been a huge success; the single “I Want You to Know,” a poppy number that features singer Selena Gomez, topped the charts, and “Beautiful Now” features soaring synthesizers and a simple piano melody. The title track shows off his soulful side and suggests the album’s theme (he assigned a color to each song because he considers each song to be incredibly different from the previous one).

“Considering the concept that every song is different and has its own emotional feel, I thought that was my best excuse to put a song like that on the record,” he says. “I never had the courage to do that because I was afraid people would think I had changed. It was a great feeling. The concept of ‘true colors’ allowed me to make songs that might not have a drop or be 120 bpm.”

“Transmission” features a mix of electronic music and hip-hop; it includes a cameo from the rapper Logic. Zaslavski says he’s not a huge hip-hop fan, but he enjoyed working with the up-and-coming rapper.

“I love the vibe [of the song],” he says. “It sounds very different. The decision to have a rap on it was very casual. When I started it, I didn’t think it was going to have a rap on it. I heard about Logic. My manager played me some of his stuff. I’m not a rap expert at all, but I liked his stuff. I liked his timing. That’s a big thing for me. I like when rappers on super on time like Kendrick Lamar.”

He hit Logic up on Twitter and told him that he wanted to work with him. Logic was up for it and told Zaslavski to send him a demo, which he did.

“I sent him the demo and went to dinner,” says Zaslavski. “I came back and [the vocal track] was in my inbox. He is incredibly talented. He just produced it himself and sent me an amazing rap. I didn’t know if I could change things around. He just told me to whatever I wanted. I chopped it up a little bit, and we had a rap on the record.”

“Illusion,” a somber song that features a collaboration with the indie rock act Echosmith, works really well as a closing number.

He says the live performance is “all about the show.” He worked with the artist Beeple, who created original graphics for a LED wall.

“He’s my favorite artist,” says Zaslavski. “I think he’s a genius. I think he’s going to be one of the most famous animators in the world. He got famous for making one art piece a day for the last six years. He didn’t leave Christmas or New Year’s or any day out. We asked him to work on special graphic content. We wanted him to consider doing it for half a year. We decided on the aspect ratio and resolution, and he created content to work perfectly with out production. It’s very difficult to do. We have incredible content with a really, really good LED wall.”

For two weeks of rehearsals, all they did was assign visuals and think about what kind of lighting to use. But Zaslavski says the music still matters.

“I played the first show without actually having a set,” he says. “I spent all my time making the show look amazing, and I didn’t work on the music yet. The last part was the music content. As a DJ, that’s fine. That’s what we’re used to. We go on and wing it and read the crowd. The most important is for people to go home having experienced something in this genre that they haven’t experienced before.”