Mark Oliver Gebel's the guy who makes the animals dance. 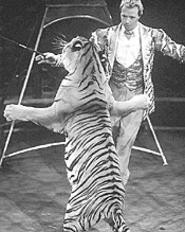 In circus circles, Mark Oliver Gebel is known as the Maestro of the Menagerie. And Asia, Toby, Banco, and Tonka can back up the claim. They're among the 10 lady elephants Gebel has trained to pirouette, waltz, and kick through a Rockettes-style conga line in the 133rd edition of the Ringling Brothers and Barnum & Bailey Circus, which opens Friday at Gund Arena.

Gebel is the main force behind the elephant and Bengal tiger acts. The son of famed wild-animal trainer Gunther Gebel-Williams, the 32-year-old first toddled into the ring when he was two years old. At 10, he was jockeying a giraffe. Two years later, he was directing a gaggle of billy goats. By 1993, he was the youngest trainer in Ringling Brothers history to simultaneously control three rings of elephants. "I have so much respect for the elephants," Gebel says. "They are my elders. They are my family."

That admiration shows under the big top. Flanked by Brazilian dancers, Gebel choreographs a playground of pachyderms that are capable of standing on their hooves, jumping on trampolines, and doing somersaults over each other. They could also stomp the spangles off Gebel, if they were so inclined. "My wife [performer Cristina] puts her leg in one elephant's mouth," Gebel says. "So there's a lot of trust in that."

The trust keeps on coming when the tiger cages are thrown open, releasing six female and four male beasts into the ring. (For dramatic effect, a microphone is placed near each tiger's pedestal, to amplify their growling and snarling at each other and at Gebel.) This season's tiger show features three 3-year-olds making their debut in front of a live audience. Even after two years of training, the youngsters tend to be frisky -- so far, not Siegfried-&-Roy, lunging-for-the-throat-style frisky, but frisky nonetheless. "Sometimes they like to test the other ones to see if they can be a little stronger," Gebel explains. "But I make sure everybody behaves and leaves the older ones alone."

This year's circus features all the time-honored acts: cavalcades of cowboys and acrobats and the hyperactive Bello, an orange-haired daredevil comic whose antics play out on bungee cords, trampolines, and a high wire. Then there are the Torres Brothers, who orbit a steel sphere on motorcycles at 65 miles an hour, constantly buzzing within inches of each other. "We're living in an age of visual overload," says director Philip Wm. McKinley. "[We] want to capture that sense of nonstop energy in a playful, colorful, eye-popping way."