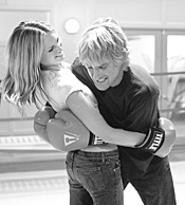 Surf's up. Palm trees sway invitingly in the breeze. The sparkling beaches are amply decorated with bikini babes and hard-body surfer dudes. Everybody has a nice cold drink with a wedge of fresh lime in it. Seen that way, The Big Bounce is as alluring a midwinter pitch for the glories of Hawaii as any tourist board or chamber of commerce could come up with. Problem is, Bounce also intends to serve as a heist movie fueled by sex, greed, deception, and double cross -- a film noir spiked with humor and heated by the tropical sun -- and on that score, it's pretty weak stuff.

Little matter that director George Armitage (Grosse Point Blank, Miami Blues) and Venezuelan screenwriter Sebastian Gutierrez (Gothika) had an Elmore Leonard crime novel to work with -- the same rich opportunity that stirred director Barry Sonnenfeld to his dead-on satire of Hollywood in Get Shorty, revived John Frankenheimer's gift for degenerate villainy in 52 Pick-Up, and energized Quentin Tarantino's sharp hipster games in Jackie Brown. Thanks to his nimble plotting and streetwise dialogue, Leonard has helped many a moviemaker look good over the years. But not this bunch. Not this time.

Bounce wants in the worst way to reproduce the crucial balance between effortless thrill and perverse ambition that drives the best caper movies. But its two young principals, Owen Wilson (Bottle Rocket) and Sara Foster (a long-stemmed fashion model whose chief dramatic gift consists of waggling her butt) don't get it done, and a generous sprinkling of veteran stars -- Morgan Freeman as a mysterious district judge on the north shore of Oahu, Gary Sinise as a sleazy real estate developer, and Charlie Sheen as a buffoonish gofer -- can't do much to aid the cause.

The amiable-seeming Wilson, who will next appear in the new Starsky and Hutch feature, here resuscitates a familiar type -- the aimless drifter with a police record and a penchant for bad luck. He's a likable petty thief, who doesn't mind burglarizing a fraternity house or stealing the occasional car, but who immediately finds himself in deep water when a big score comes his way. Hey, the guy has blond bangs. He surfs. That his name is Jack Ryan should disturb no one: Created back in 1969, Elmore Leonard's Jack Ryan precedes techno-novelist Tom Clancy's dashing CIA agent of the same name by 15 years (the first filmed version of The Big Bounce also came out in 1969, with Ryan O'Neal in the lead role).

Unfortunately, Foster plays the femme fatale of the piece, one Nancy Hayes. A sleek blond beach beauty, Nancy allegedly has a taste for illicit adventure and a gift for manipulation, but Foster's performance suggests Sandra Dee more than Barbara Stanwyck or Kathleen Turner. When Nancy supposedly gets her hooks into Jack, it's a little hard to believe. She seems more concerned with her many costume changes -- bikini to halter top, sarong to strategically wrapped towel -- than with her instinct for betrayal, and even her darkest, most amusing lines of Leonard-generated dialogue suggest a teenager playing a tough girl in the school play.

Of this caper's complications, suffice it to say that Jack and Nancy (along with almost everyone else, it turns out) are in single-minded pursuit of $200,000 that's been secreted away by Sinise's odious developer, Ray Ritchie. By the time a few bodies are scattered around and we're finally liberated to the lobby, all the usual twists of plot and weird revelations of character common to the caper and film noir genres have been played out -- without much force or effect. Some sketchy minor characters materialize in the forms of song legend Willie Nelson and the fine character actor Harry Dean Stanton, who pop in for a quick game of dominoes with Morgan Freeman and then promptly vanish. Must be friends of the family. Meanwhile, Armitage inserts a couple of surfing scenes to remind us again of Hawaii's sunny attractions, and in the end spirits his hero away in the back of a white stretch limousine. Revealing this here and now does not, I assure you, constitute a betrayal of the viewer's anticipation of mystery. The low-wattage thrills, lukewarm jokes, and unconvincing caricatures that we encounter in The Big Bounce simply don't generate that kind of excitement. Elmore Leonard gets another check, but he deserves better, even 35 years after the fact.