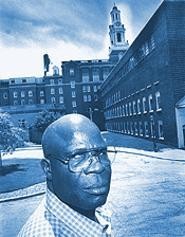 Wandering an empty, unlit hallway at St. Luke's Medical Center, John Anoliefo, director of the Buckeye Area Development Corporation, gives an angry sigh. "You should have seen this place when there were 2,000 people working here," he says, passing bronze plaques of the hospital's former benefactors and trustees. "People were coming in and out all the time."

Now there's not a patient in sight. A nurse walking by echoes Anoliefo's frustration. "I've been here 16 years," she says. "It's pitiful to see it like this."

St. Luke's has been declining for years. But what riled Anoliefo last week was an appeal to the Cuyahoga County commissioners for a $90 million bond issue by St. Luke's owner UHHS/CSAHS-Cuyahoga Inc., the year-old partnership between University Hospitals and Sisters of Charity of St. Augustine Health System (CSA). The partnership is asking for the bond to renovate and expand services at three of its four hospitals: St. John West Shore in Westlake, St. Vincent Charity Hospital downtown, and Mercy Medical Center in Canton.

But none of the money is going to St. Luke's. And Anoliefo wants to know why.

"It's like somebody who has an old car in the backyard and goes and buys another junk car and keeps on taking parts out of it to repair the first one," he says. "They have taken everything from St. Luke's to shore up other hospitals."

With a dozen community residents standing behind him, Anoliefo objected to the bond issuance after it was proposed at the meeting. "We are here to voice our objections," he told the commissioners, "because this partnership has failed to fulfill its commitment."

As recently as two years ago, St. Luke's was still a full-service, acute-care community hospital. But starting last spring, the struggling facility cut inpatient services, shifting the remainder of its medical and surgical units to St. Vincent's. University Hospitals, which, at about the same time, had replaced the ill-fated Columbia/HCA Health Care as CSA's partner, announced that it would fill St. Luke's empty beds by relocating its Hanna Pavilion psychiatric unit. St. Vincent's was to transfer its inpatient psychiatric beds to St. Luke's, too.

But by October, the plan had fallen through. UH spokeswoman Eileen Korey says that moving Hanna turned out to be both expensive and impractical. "Patients with severe mental illness problems need a very secure environment," she says. The cost of renovations at St. Luke's, which isn't set up as a mental facility, "just became prohibitive, once we began to look into it."

Nor did the 60 psychiatric beds relocated from St. Vincent's work out. According to partnership CEO Michael Rutherford, they were moved back to St. Vincent's after seven months, because "as further analysis was done, [the move] was found not to be a prudent decision."

St. Luke's now survives only as a 24-hour emergency room with a 150-person staff and an adjacent office building for 30 doctors. This has greatly upset activists in the Buckeye-Shaker neighborhood, who feel cheated by the partnership's and UH's change in plans.

"They made a promise," says Anoliefo. "Nobody forced them to make that promise. They made it, and they should keep it."

In March, when Anoliefo and fellow residents got word that UH was shelling out $12 million to buy St. Michael and Mt. Sinai-East hospitals, they staged a protest rally outside St. Luke's. A month later, 100 angry residents marched two miles from St. Luke's to UH, where they sang and chanted.

Rutherford defends the partnership's decisions as appropriate responses to the medical needs of the Buckeye-Shaker neighborhood. "Inpatient volume at St. Luke's had dropped, and the community was seeking its inpatient care from other facilities," he says. "We are providing the medical services in response to what the community is demanding. The community is continuing to use it as an emergency room, and we're continuing to operate it as such." By Rutherford's estimate, St. Luke's ER sees about 1,200 patients a month.

But Anoliefo isn't worried about community medicine; he's worried about economics. "It is about jobs," he says. "It is about having economic activity in this community. What they have taken away is the hope for the neighborhood to have people work there. And we're asking them to put that back."

Korey says that relocating the Hanna unit never held the promise of jobs for the neighborhood. "We were going to move our staff as is," she explains.

Though St. Luke's isn't slated to receive any of the new bond money, Rutherford insists that the partnership remains committed to the hospital and the neighborhood. "Our goal is to redevelop the campus into something that benefits the community," he says. "We want to continue the importance and the legacy that St. Luke's has had on that community."

However, the ultimate use of the hospital building is still under review. And Rutherford can't even guarantee that it will remain a medical facility. To the neighborhood groups awaiting a psychiatric unit, or a similar medical operation that would hire neighborhood residents and fill the building, he has been sympathetic but firm.

"Their requested solution is something that's not under consideration at this time," Rutherford says. "I think that's the source of their frustration."

It also frustrates Anoliefo and Reid Robbins, director of nearby Shaker Square Area Development Corporation, that while they've met with Sister Judith Ann Karam, who heads CSA, and on numerous occasions with Rutherford, UH President Farah Walters has refused repeated invitations to talk with them. After the public hearing on the bond issue last week, county commissioners herded the opposing parties to a conference room and encouraged them to work out their differences. During that meeting, Robbins and Anoliefo say, Rutherford promised to try again to coax Walters to the table. Neither feels certain she'll come, but Robbins, at least, was heartened by the meeting.

Anoliefo, more guarded, is still holding out for a meeting with Walters, who he believes has the ultimate say in partnership decisions. "We aren't going anywhere," he says. "We're going to be there every corner they turn."

Strolling St. Luke's deceptively well-manicured lawn, Anoliefo leans over a staircase railing at the corner of the building and peers into a maintenance pit. An air conditioning unit has flooded and is standing in several inches of water.