Will underground hip-hop ever do more than bitch? 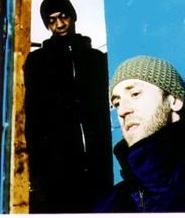 "So what the fuck is your definition of underground?/Depressing beats and bleak cats who love the sound?/Well I ain't part of that, I'm tired of rapper's garbage/I'm the part of the underground who only feels the raw shit. "

RJD2's Deadringer threatened to change hip-hop. It dashed headlong out of the gate, opening with "The Horror," a brilliant, captivating, kaleidoscopic action-adventure score. This instrumental was different, a here-and-now minidrama making former deity DJ Shadow sound simple and holy ghost DJ Krush sound boring. Smartly, RJD2 opted to hold the traditional hip-hop intro for track two. That 37-second spoken sample ended with a tease: "I can't decide which piece to start with, so I won't start with any of the pieces. I've already started. "

A producer who got straight down to business, so full of ideas that he bypassed the norms of hip-hop to air his head? This was a new chance for the underground, which, by most definitions, is expected to be at the cutting edge of music despite its diminished popularity. Hip-hop of the last decade teaches us that the commercial cats are all about booty, bottles, and Benjamins, but the underground cats keep it real, smoking a little weed and having their sex, but actively speaking out against social injustice and unjustified emcees.

But this album seemed unconcerned with enumerating the excesses of mainstream hip-hop. Instead, it seemed ready to take it on and win. Deadringer also sported the first track from Soul Position, the name used for collaborations between RJD2 and Minneapolis rapper Blueprint. That track, "Final Frontier," became an ultimatum and a promise for hip-hop heads: A sweet soul sample dripped electronic prescience in the background, politely saying "The show is over." Blueprint, meanwhile, supplied sucka emcees with one last chance to step away from the mic, telling them, "We're here/the final frontier."

For a moment, it seemed that underground hip-hop was becoming that final frontier, a vast expanse of potential. Three months before, RJD2's label, Definitive Jux, had released EL-P's sci-fi masterpiece, Fantastic Damage, which followed Aesop Rock's powerhouse Labor Days by less than a year. Simultaneously, Minneapolis' Rhymesayers was booming with acts like Atmosphere and Eyedea & Abilities, and California's Anticon sported a collective of ultra-exploratory heads with names like Dose-One, Sole, and Why?

Three years later, the cutting edge is rusty, its blade still made from the right stuff, but devoid of the shine and sharpness that once made it so effective. The American hip-hop underground -- a loaded term that, here, refers to hip-hop not aiming for the Top 40 -- is stale, choking on the size of its own big ideas.

The primal urgency is gone. Fantastic Damage, Atmosphere's Lucy Ford EP, and Subtle's Winter felt like things that had to be made, things each artist needed to get out of his head. Now it seems as though artists from those camps are releasing albums because it's expected, producing unnaturally cramped, limp stuff, choking on throwback status or stale, my-flow-is-better-than-yours comparisons.

RJD2's career serves as an apt example of fruit that showed signs of ripening, yet rotted on the vine. None of his production has echoed Deadringer's urgency and clear-headed concision. He's produced two full-length albums this year, one for Aceyalone and the second Soul Position LP with Blueprint. Aceyalone's Magnificent City is just a bad album, an under-baked, hurried affair of corny rhymes ("Supahero" is one of the worst love tracks ever) over unrealized beats from RJD2.

Soul Position's Things Go Better With RJ and Al is good enough. It's confident and sassy, Blueprint's brash rhymes bolstered by some of the most aggressive RJD2 beats in years. But it hits the same wall that so much underground hip-hop hits: It's more interested in calling out the inferiority of other, more wealthy emcees than anything else. Blueprint takes a few jabs at the in-the-club culture of Jäger bombs and cantankerous relationships, but he mostly wants to tell you why he's not one of them. That's as stale as Lil' Jon's yelps and as lame as "Laffy Taffy." Seriously, it's not as if the world's foremost concern is the superiority of emcees on independent labels over those making the most money.

The underground has barely scratched the surface of American politics since 2001, unleashing venom on Bush either in stupidly subtle strikes or dumb-and-blunt attacks, if at all. In today's hot political clime, underground hip-hop would seem in prime position to offer acerbic, adroit analysis. After all, it's largely unconcerned with wide commercial appeal, and it should hold fast to the retaliatory roots of hip-hop as a force. Sure, there have been excellent one-offs (see "Oil Thicker Than Water," from Kaze, who's underground only because his star is still rising) and tiresome rants masquerading as songs (see Sole's Live in Rome), but no one has made the perfect protest song yet. Maybe underground artists feel they'll be preaching to the choir, while mainstream cats avoid what they know won't sell in Wal-Mart.

Even Sage Francis, a Providence rapper whose "Makeshift Patriot" single is one of the essential pieces of music released in response to 9/11, largely forwent political polemics on his brilliant but somewhat irrelevant 2005 album, A Healthy Distrust. While the president played golf and American soldiers died, Francis -- who had the luxury of wide distribution and the backing of punk-rock label Epitaph -- was content to release an album about sex in backseats and high-society crack addicts. Def Jux's the Perceptionists poignantly touched on the issue, but only Cage -- a Def Jux emcee who became suicidal as a teenager, as part of an early test group for Prozac -- did something really different. On his Hell's Winter, former Dead Kennedys leader Jello Biafra played Bush for one track, his imitation inspiring Cage's wrath. It was creative and hard, urgent and smart. That's a start, at least.

People are always lamenting the mainstream guys, accusing them of making records simply to get rich. I don't know whether that's worse than making albums simply to make them -- especially while treading weed-high trails that once seemed destined for a new wave of really groundbreaking hip-hop.

Oh, and if you were wondering what "FHH" from that RJD2 track meant, it means "Fuck hip-hop," as in the second couplet of the song's chorus: "And all the real heads scream 'Fuck hip-hop'/Until all this mediocre bullshit stops." Be careful what you wish for.