D12 looks to get out from underneath Slim Shady's shadow. 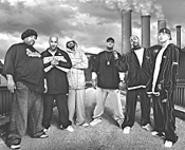 "I have to let the world know that if it wasn't for D12, there wouldn't be a Slim Shady," says Swift of his infamous D12 cohort Eminem. "The name 'Slim Shady' stems from the creation of D12, and that's what he introduced to the world in 'Hi, My Name Is . . .' That's just to let everybody know that he was always in the group."

Swift and the rest of his crew -- Proof, Bizarre, Kon Artis, and Kuniva -- aim to let the world know that they're not just a bunch of coattail riders who latched onto Eminem's success: They're with Shady Records because of their talent, not because they're down with a multiplatinum superstar.

D12 came together during the first half of the '90s in Detroit's burgeoning hip-hop scene. Every Saturday afternoon, the MCs would convene at the Hip-Hop Shop, an open-mic club owned by fashion designer Maurice Malone. "We called in to work or got off of work and did whatever we could to meet up at that spot every Saturday, because that's all we had," Swift recalls.

Toward the latter part of the '90s, as the Motor City's hip-hop scene continued to grow, local MCs -- particularly the members of D12 -- started getting serious about careers as rap artists. Before the formation of D12, Swift was signed to BMG Records with a group called the Rabies; Kon Artis and Kuniva were close to getting a deal as Da Brigade; Proof released a much-talked-about single, "Searchin'"; and Bizarre was putting the finishing touches on his independently released album Attack of the Weirdoes. Eminem had already released a disappointing solo effort titled Infinite and was looking for a new and different direction. The group of MCs continued to meet up every week at the Hip-Hop Shop and supported each other at their individual shows. At that point, Swift says, to have any chance of breaking out, they agreed they needed to stick together.

Shortly afterward, Eminem created his Slim Shady alter ego for the Dirty Dozen projects; he then recorded and released The Slim Shady EP. The major underground buzz surrounding the EP landed Eminem cameos on other artists' singles and albums, along with appearances on The Wake Up Show with Sway and Tech, and in the Rap Olympics, where he placed second in a freestyle battle tournament. But the moment that later changed Em's life -- and, subsequently, D12's -- was when Dr. Dre picked The Slim Shady EP out of a stack of tapes in the office of Interscope head Jimmy Iovine. After listening to the disc, Dre signed Eminem to the Aftermath imprint. But when Interscope/ Aftermath released The Slim Shady LP in 1999, with the exception of a production credit for Kon Artis (aka Denaun Porter), the rest of D12 was nowhere to be found. After Eminem moved to Los Angeles, the group started to get anxious and began questioning his loyalty. But Em quickly returned to Detroit and made it clear that he was going to keep his word.

"There were a lot of things that we couldn't understand, because we were on the outside looking in," says Swift. "But we had to remain patient and hold on."

D12 made its first appearance on 2000's Marshall Mathers LP, on the song "Under the Influence." The same year, Eminem launched Shady Records under the Aftermath/ Interscope umbrella and began work on D12's debut album, Devil's Night. The record came out the following year with the lead single "Purple Pills," followed by "Fight Music." Although the disc was certified platinum later that year, most of the attention was directed at Eminem and not the rest of D12.

"When it was time for us to shine," Swift says, "the people who interviewed us would ask us 10 questions about Em. So we used to just sit back and say, 'Man, they really don't take us seriously.' We had to let the world know that we have always been doing this, and we're in it to win it."

In an effort to establish itself as a separate entity and keep the D12 name fresh, the collective put out a mixtape during its hiatus. Proof also released a vinyl-only EP titled Electric Kool-Aid Acid Testing and an album with rapper Dogmatic titled Promatic; Kon Artis produced tracks for 50 Cent, G-Unit, and Obie Trice, while the rest of the squad made appearances on other Shady Records projects.

When the crew finally reconvened in 2003 to work on the follow-up to Devil's Night, it wanted to establish itself as something more than just Eminem's boys.

"It was real hard for the audience to really tell who was who," Swift admits. "So with this album, D12 World, we had to establish our own characters and let everybody see where we were coming from through our eyes, individually. We all played a big part in making this album, and we just thought we had to step up our game and let the world know, 'Hey, it's time to establish ourselves.' So Eminem gave us the ball, and we had to run to the end zone with it; he gave us the opportunity to get loose."

The first single from World, "My Band," plays on the fact that Eminem's success has overshadowed D12's efforts. Swift confirms that there is no bitterness within the group about Em's popularity, although he admits that there's sometimes tension in the studio.

"To be honest with you, we might have differences, because Eminem is a producer and Kon Artis is a producer," Swift confesses. "So there might be some differences here and there as far as which track is going to be used for whatever. To the MCs that don't produce, if we get a nice track, we're going to rap on it regardless if Em and Kon had a disagreement. They always smooth it out at the end of the day anyway."

Tempers aside, plans for solo albums are in the works for all the band members, but Swift maintains that this year is all about D12.

"It doesn't matter what people think about us," he says. "All we want is for them to take us serious as rappers. At the end of the day, I want you guys to say, 'Yeah, I can relate to that, but you know what? They're some fresh MCs, and they rap over good music.'"