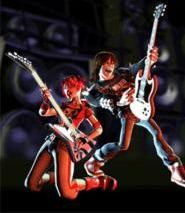 No one expected this rhythm game -- sold with a miniature plastic guitar -- to play to sellout crowds. But it became the most addictive game of the year and one of the most attractive to nongamers. The reason is simple: It's karaoke with a whammy bar.

Now, like a long-awaited reunion tour, Guitar Hero II arrives with much weightier expectations. So does it live up to the hype?

Unless you're a Kajagoogoo fan, Guitar Hero II's set list won't disappoint. More musically diverse than the original, it includes everybody from Guns N' Roses to the Rolling Stones to Foo Fighters. You'll be struggling to keep up with Anthrax's speed metal and nursing a sore wrist after playing Dick Dale's "Misirlou" (aka the Pulp Fiction theme). Some classics don't translate well, but for every ho-hum Stone Temple Pilots riff there's an Iggy & the Stooges song, ready to search and destroy your confidence.

Aside from the new songs, you'll also occasionally be rewarded with a wild crowd of fans shouting "Encore!" If you choose to indulge them, you'll unleash one the game's eight secret tracks, including Guitar Hero's version of the final boss fight: Lynyrd Skynyrd's nine-minute "Free Bird." If ever there was a time to raise a fake lighter, this is it.

The biggest improvement this time out is in the two-player mode. Now two friends can jam in the same band, choosing between lead, bass, and rhythm guitar. Say what you want: Playing fake bass guitar on a Cheap Trick song may be cooler than actually being in Cheap Trick these days.

The sweetest improvement is Practice Mode, and it's a godsend for those who get 85 percent through "Sweet Child o' Mine," only to be booed offstage when they flub the solo. The option to practice any song at any speed means that this time around, there's hope of actually finishing the game without learning guitar tablature.

With bands lining up to star in the series after the success of Guitar Hero (Jane's Addiction forked over master tapes), it's a surprise that not every song is worthy of this sequel. Bands like the Sword should have been kicked to the B-side curb. Memo to developers: No one mentions Matthew Sweet and "guitar god" in the same breath.

Some songs don't survive translation. Who knew Nirvana's "Heart-Shaped Box" was this boring to play live? And Rage Against the Machine's "Killing in the Name Of" is completely ruined by the singer. Hey, for a few dollars more, they probably could have hired the real Zach de la Rocha.

Like the old acoustic you found in your dad's attic, the game's unlockables need a major tuneup. All you get is a paltry three bonus characters and a couple new outfits. And the bonus tracks you buy are a waste of airplay. Why fritter away disc space on "Bang Camaro" when we have yet to see Iron Maiden make an appearance? EDDIE LIVES!

Guitar Hero II is a solid entry, but die-hard fans are already thinking about the future. The Xbox 360 version of Guitar Hero II will have downloadable song packs, along with a wireless guitar. Rumor has it that developers are working on a three-person multiplayer mode (guitar, bass, and lead) for Guitar Hero III.

But if you're going to put that much time into it, shouldn't you just start a real band?