End of the Road

Trio is the network where great shows go to die, and so much more 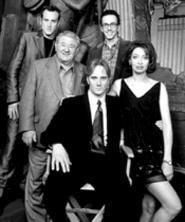 Notes from a network executive's forthcoming biography, pilfered from the desk of an editor at a major publishing house. This was hard to read, as it was scribbled in crayon on the back of a copy of Highlights taken from a pediatrician's office.

From page 412: "Last week, I met Jim Belushi, whose brother was apparently some famous dead guy who used to be on a TV show that started before I was born and airs way past my bedtime, which means my mommy won't let me watch it. (I hate her.) Jim wants his own show, which sounds like a bad idea (he's fat and not funny!), but at recess, my friends Gail and Warren told me that America likes fat and unfunny people. They had something called 'research' and 'statistics' that proved it, so I said yes and told Mr. Belushi he could have a show and it could be on all the time even if it wasn't funny, because it isn't."

From page 539: "For our school musical this year, teacher is making us do C.S.I.: Miami, though everyone knows it's just a rip-off of last year's big hit C.S.I., which won best prize for the fourth-graders."

From page 613: "This is my bestest new idea for a TV show ever: Survivor: Dodge Ball."

There are about 291 reasons why "good television" has become the ultimate oxymoron, not all of which begin with the words "Jim Belushi," "reality shows," "Law & Order" or "ABC." Here are a handful, culled from a few years of interviewing TV execs, series creators, producers, actors and a cage full of baboons liquored up on their own urine. Audiences, hard as this is to believe, loathe shows that challenge them, that question their beliefs, that demand their attention, that ask of them more than eyeballs but brains and hearts as well. They prefer shows that look like other shows they loved in the past, which is why they tend to confuse Yes, Dear and Good Morning, Miami with actual entertainment when they are, in fact, government brainwashing projects. Network executives, whose capacity for creativity is outweighed only by their capacity for cowardice, believe the viewing audience is stupid and/or dead. And show creators, in an effort to get their pilots on the air, have taken to recycling St. Elsewhere, Hill Street Blues and/or old Shields and Yarnell episodes.

Want to know which comes first, dumb television shows or the dumb audiences that make hits of them? M*A*S*H creator Larry Gelbart does not take a breath before answering. "The dumb shows," he says, "and then the dumb executives who say, 'This is what they want,' having been trained to want or to react to the garbage." There you go.

The history books, by which I mean two three-page pamphlets, are littered with great shows that lasted more than two seasons. Easier to find are those that aired a mere season or less before getting axed in recent years (Freaks and Geeks, My So-Called Life, The Tick, Action, Gun, Wonderland, good vs. evil, American High, Undeclared, even the new and newly dead Push, Nevada) or never even made it past a single episode aired in the wasteland of midsummer. Here's the very short list of some of the most recent Best Shows You Will Never See: L.A. Sheriff's Homicide, created by crime novelist James Ellroy for NBC; Killer App, an hour-long dot.comedy-drama for ABC by director Robert Altman and Doonesbury's Garry Trudeau; North Hollywood, Judd Apatow's show about four struggling actors, one of whom is named--and played by--Judge Reinhold; Heat Vision & Jack, a Ben Stiller-directed comedy about a former astronaut (Jack Black) and his talking motorcycle (voiced by Owen Wilson); and Lookwell, a Conan O'Brien-Robert Smigel-written comedy in which Adam West plays a TV cop who thinks himself The Real Deal. All were scheduled to air in recent years; none made it past the desks of 12-year-old TV executives who didn't want to make Daddy, or Rupert Murdoch, mad.

All this month, the Trio network is dedicating its schedule to celebrating shows so good they lasted only a handful of commercial breaks. They're series that Trio execs have taken to calling Brilliant, but Cancelled, and they include such landmarks as The Ernie Kovacs Show, the early-'50s variety show that still makes Letterman look like Leno; East Side, West Side (1963-'64), in which George C. Scott played a social worker fending off rats literal and figurative; Kolchak: The Night Stalker (1974-'75), featuring Darren McGavin as a crime reporter chasing after the likes of Jack the Ripper and assorted other monsters; Action, the late-'90s Fox show starring Jay Mohr as a movie-studio exec with a foul mouth and a hooker assistant; and United States, Larry Gelbart's seriocomic look at marriage that aired for just seven weeks in the spring of 1980. Also included are a few series not so brilliant but rightfully hailed as daring considering they looked like nothing else, meaning they didn't resemble everything else: Profit, about a man who killed by day and slept nude in a cardboard box by night; Gun, Robert Altman's anthology series about, well, a gun; The Famous Teddy Z, starring Jon Cryer as a mailroom worker who becomes a Hollywood agent; and the beloved Now and Again, otherwise known as ABC's fortysomething.

Combined with the 90-minute documentary Brilliant, but Cancelled, in which veteran TV writers and execs discuss failed genius (usually their own), and a handful of other documentaries and talk shows dedicated to misbehaving networks, Trio in December looks very much like a cable channel bad-mouthing the majors. It's a month-long celebration of frustration and inaction, futility and ignorance; you can't help but watch Trio and wonder what television might be like were its best offerings not ghettoized to a channel available in only 17 million households, most of which have no idea what Trio is or even that it exists at all (most people seem to think it's a home-shopping network, a QVC holding pattern, since the net isn't currently broadcasting 24/7).

During December, Trio certainly hints at a world that could have existed but will never exist...

"Dot, dot, dot, except on Trio," says Lauren Zalaznick, who became Trio president and head of programming in May of this year. "This is a great opportunity for us. We want to define what we perceive as a real wish on the part of the consumer for the stuff that makes you feel good about watching. And I don't mean the makes-you-feel-good, happy-smile-on-your-face sitcom. I mean, these are shows that give you a good feeling for having watched them. This whole week I've been getting calls like, 'I'm tired. It's your fault. I just kept watching. I watched East Side, West Side. I didn't want to watch Profit, I watched Profit. I didn't want to watch the next one, I watched it. It was 1:30 in the morning. I'm tired. It's your fault.' That's kind of the feeling we want to deliver every month of the year. That's the goal."

Zalaznick came to Trio from VH1, where she had a significant hand in creating shows such as Pop-Up Video, VH1 Divas Live! and Bands on the Run--none of which should be held against her. Before that, she produced independent films, including some from Far from Heaven director Todd Haynes (Safe, Dottie Gets Spanked and Poison) and Larry Clark's Kids, which makes her the least likely candidate to run a network since, well, ever. She considers herself more a curator than a programmer, meaning she envisions Trio not as a test pattern with commercials to turn on and tune out after a long day at the office but as a pop-culture repository devoted to "movies and fashion and film and TV and politics and technology--the life of the culture." In other words, it's the Vanity Fair of networks.

The Brilliant, but Cancelled month is one of four month-long events--or "stunts," as Zalaznick likes to say--the network's boss plans for each year. It was preceded by June's theme of Uncensored, which featured documentaries such as TV's Most Censored Moments and The History of Outrage, as well as unexpurgated and commercial-free screenings of Stanley Kubrick's Lolita and Bernardo Bertolucci's Last Tango in Paris. Zalaznick wants to use these themed months to reinvent the network: It's likely that after Brilliant, but Cancelled ends, Trio will begin running other canceled series (like, say, the Dabney Coleman show Buffalo Bill) that have been little seen since they originally and briefly appeared. "Each of these months is a microcosm of what the service is going to look like in two years," Zalaznick says, adding that beginning January 2, Trio will launch its first weeknight prime-time schedule, airing a live-music performance at 7 p.m. C.S.T., a documentary at 8 and reruns of NBC's Late Night with David Letterman at 9. (Late Night will also run, as a marathon, over the New Year's holiday.)

"Every night at 7, we'll have the only live music performance on television, you know, despite the 19 music channels already out there, and that's a big statement," Zalaznick says. "If I say I have David Letterman every weeknight at 9, that's a big statement. And I'm launching a special documentary block that in and of itself slices up my Trio pop-culture pie every night. It's a one-hour documentary on politics, war, fashion, film, it's a biography, it's a classic documentary, it's a brand-new documentary that's at Sundance. It's an avenue for specials that really doesn't exist." Eventually, Zalaznick says, Trio will begin producing or co-producing scripted half-hour or hour-long series; already it's home to The Moth, a program in which actors and musicians and regular folk perform spoken-word pieces about specific issues (relationships, September 11, rock and roll, etc.).

Trio's hardly a renegade: It's owned by USA Cable and Universal Television, which brings you the likes of Jerry Springer, Maury Povich, the dozen Law & Order series and such, ahem, shows as Blind Date and Crossing Over with John Edward. It's also responsible for the Randy Quaid white-trash "comedy" The Grubbs, which Fox mercy-killed before it ever aired this season--it's canceled, yeah, but the opposite of brilliant. Maybe that's why Zalaznick bristles when someone says Trio feels like the anti-network; she's wise not to bite off the hand that feeds her, especially when it wears a gold pinkie ring. Still, she's quick to point out her network is an oasis in the TV desert. I tell her that as soon as one switches off Trio and heads back to CBS or NBC or ABC or Fox, well, you're back in the wasteland. She laughs.