The New Black Panthers want a revolution, but they'll settle for an audience. 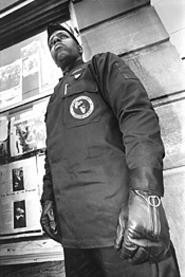 Before the lens of a Channel 5 camera, Najee Muhammad looks like he's exhorting a teeming throng to rise against their oppressors. He wears the all-black military uniform of the Black Panthers. His face is a mask of defiance, and he speaks in confrontational tones.

"I'm giving a warning of a moment of extreme danger in the black community," he shouts.

It's as if a 1960s radical awoke from slumber and picked up in mid-speech where he left off. But save for two journalists, no one is here to listen. A few passersby cast curious glances from across Euclid Avenue in East Cleveland, but none lift their fist in solidarity.

"I wanted to bring some of the community to stand in the background as spectators, to make it look all right," Muhammad confided earlier. "But I don't know anybody out here."

This is not your father's Black Panther Party. That one, founded by Bobby Seale and Huey Newton in 1966, had a profound influence before falling apart from inner-party squabbling, FBI surveillance, and clashes with police. No, this is the "New Black Panther Party," which formed in Dallas in 1989 and entered the media spotlight in 1998 when it elected Khalid Abdul Muhammad, the late Nation of Islam spokesman known for his anti-Semitic tirades, as its national chairman.

Most of the old Panthers want nothing to do with the new group. Seale called it a "black racist hate group." The Huey P. Newton Foundation posted a letter on its website that read, "There is no New Black Panther Party." And two old Panthers won an injunction barring the new group from using their name and logo in Texas.

But none of that matters to Najee Muhammad. He's determined to spread the new Panthers' message, which calls for blacks to be exempt from military service and taxes, and be released from prison.

Muhammad is short in stature, but makes up for it with outsized rhetoric. He calls himself a "truth terrorist," "knowledge gangsta," and "black historian hit man." As a young man, he studied the Koran, devoured PBS's Eye on the Prize series about the civil rights struggle, and found parallels in his own encounters with police. "It's like a cycle, coming back again," he says.

But if he bristles from police harassment, he bears as much responsibility as his white oppressors. In 1989, he was sentenced to six years' probation in Florida for passing forged checks. Two years later, he pleaded no contest to resisting an officer, for which he served 60 days in jail. From there he was shipped to Alabama, where he was wanted for flight to avoid prosecution, again for forgery. He says he also served time for trafficking guns across state lines.

All told, he was incarcerated for more than eight years. He was released in 1998 and returned to Cleveland, where he served as an "assistant captain" with the Nation of Islam. Later that year, he attended the Million Youth March in Harlem, where he hooked up with the New Black Panther Party.

Muhammad helped the Panthers get a foothold in Cleveland. He says that under his leadership, the chapter grew to 60 members, who helped clean up a drug-ravaged section of Lakeview Road. They patrolled the area wearing bulletproof vests and carrying pump-action shotguns. They also ran a food bank.

The Panthers were having an impact, he says, until greater forces conspired against them. Muhammad claims that, at an African cultural festival where he was speaking to the media, someone handed him a drink. A half-hour later, he suffered sharp, shooting stomach pains and had to be rushed to Cleveland Clinic. He says a doctor told him he'd been poisoned: "He said it was the kind of poison that comes from the Mafia or CIA, something like that."

Muhammad can't quite explain why anyone, much less the mob or the government, would want an obscure activist dead. Nor can he provide medical records to support his claims. Either way, it wouldn't take a government conspiracy to silence Muhammad. His penchant for forgery makes him his own worst enemy.

Less than three months after returning to Cleveland, he charged $2,756 on his father's credit card without permission. He pleaded guilty to theft and forgery eight months later and was sentenced to a year of probation. Less than five months into his sentence, he was arrested again, this time for trying to use a $464 counterfeit check at Shaker Quality Foods. He pleaded guilty to forgery and was sentenced to nine months in prison.

The Northeast Ohio chapter withered in his absence. Membership dwindled to about a dozen people, none very active. Worse, Muhammad was behind bars last year when Panthers from all over the country converged on Cincinnati to protest the shooting of an unarmed black man.

Now Muhammad is back. He was released in February and seems determined to bring the chapter back to its former glory, especially since the party's national leadership is due to visit later this year. He's converting a gutted store on Euclid Avenue into a headquarters and ethnic eatery. He has also been scouting for new members.

Ross Kizer, 19, joined a month ago. "I wanted to get involved with some brothers with their head on their shoulders," he says, "do something real to help the community, instead of daydreaming all day."

But with just a handful of members, the Panthers haven't been able to do much. They sweep up litter, hand out fliers, and wait in their unheated headquarters for recruits to be lured in by posters promising revolution.

Muhammad claims the Panthers have the blessing of East Cleveland officials. He met with the city's police chief, law director, and deputy safety director last year and says they welcomed his help. "They're glad we're here," he says.

That's partially true. Emmanuel Onunwor recently gave the Panthers a lukewarm endorsement in Cleveland Life, saying he's thankful for "anyone who wants to help the youth, be active, and promote hope and education in East Cleveland."

But Law Director Abdoul Rahim AbdoulKarim says that while the Panthers claimed to have a positive social agenda, they never provided the city with evidence of their good deeds. Officials were also concerned by news reports that Panthers carried guns during protest marches in the South. "Our inclination at that time was and remains that we do not have need for them in the city of East Cleveland," AbdoulKarim says.

The Panthers' new neighbors say they've been a good influence. Drug dealers who once loitered in front of the Park Avenue Lounge have moved to the next block. "Maybe we'll get something done now," says Janice Duncan, co-owner of the nearby J&J Food Market.

Still, the Panther name isn't what it used to be. Pauline Tarver, executive director of the local NAACP, says she hasn't heard of the new edition. And if Muhammad's press conference is any indication, building a genuine movement won't be easy.

Before he began his speech, a passerby noticed the television camera. "What's going on?" she asked. Muhammad responded with a mouthful of rhetoric that ended with "New Black Panther Party."