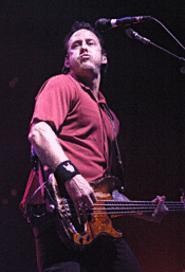 Rising from the ashes of the recently defunct Fistula, Akron sludge quartet Ultralord has inked a deal with California label This Dark Reign, which could last up to three albums. The band is just one of drummer Corey Bing's projects to receive wide release in hot-tipped underground circles next year.

"It think it all just boils down to Corey," says This Dark Reign owner John Geldbach, who was in talks with Fistula when the group disintegrated. "He's very much into his art. He likes recording. He likes writing. He's gung-ho. He does everything to keep his art going."

"No one's made an album like this in a long time," says Bing, who drums in Ultralord and sang and played guitar in Fistula. "It's what we grew up listening to: Slayer, D.R.I., Ted Nugent, Sabbath. It's really raw."

Bing and Stearns also play in King Travolta, a sludge-metal project that has recorded 10 tracks. The band is recruiting a different all-star stoner-rock singer for each song, and so far has secured vocals from Alabama Thunderpussy's Erik Larson, Bongzilla's Pee Wee, and Meatjack's Brian Daniloski. The album is slated for release later next year, as a split effort between California's Heretic Records and Shifty, the Akron-based label that Bing is a partner in.

· Canton melodic post-emo breakout Lovedrug has signed on for a fall tour with Matchbook Romance and Armor for Sleep. The lineup will be hitting the House of Blues on Monday, October 31.

· The newly remodeled Hi-Fi Concert Club (11729 Detroit Avenue, Lakewood) will record participating bands on Saturday nights on a 24-channel mixing board. Contact the club for more information at 216-521-8878.