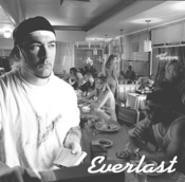 Back when Everlast's résumé consisted of two words ("Jump Around"), the House of Pain rapper's impact on pop culture appeared limited. But on 1998's Whitey Ford Sings the Blues, he became a melancholic mouthpiece for the downtrodden, matching simple guitar strums with simple hip-hop beats on the down-and-out anthems "What It's Like" and "Ends." Huge success inexplicably followed. Thus, Eat at Whitey's finds our hero with a big-time budget and a big-time stable of guest stars, as well as one troubling question: With all the magazine covers and critical acclaim, does Everlast really know "what it's like" anymore? Not really. Despite the familiar parade of junkies, pimps, punks, and thugs, Whitey's suffers from the obvious ideological canyon separating the story from the storyteller.

Thus, Whitey's best moments concern the singer himself. "Black Jesus" lays down four swaggering bar chords and lets Everlast growl about his multiple-personality image. The somber "I Can't Move" addresses his well-publicized brush with death (he had a heart attack immediately after wrapping up Whitey Ford Sings the Blues). But most hip-hop fans prefer fear to lazy complacency, and Everlast ultimately indulges in too much of the latter. The rockin' "Babylon Feeling" trots out Carlos Santana for more of his tiresome guitar work, while yawning, lovestruck soul jams, such as "Love for Real" and the uncharacteristically corny "Mercy on My Soul," fall flat. But "Children's Story" hurts the most. Rahzel, the Roots' priceless human beat box, kicks it off with a South Park Cartman impression and an energetic, bass-driven beat, but then Everlast shows up and delivers a cautionary tale about a young kid who turns to crime and winds up shot down by the cops. The track would work great as a whimsical beat-box romp or a heartfelt, streetwise eulogy, but here, it fails miserably. Everlast used to eulogize the downtrodden and hopeless, but Whitey's finds him exploiting them instead.