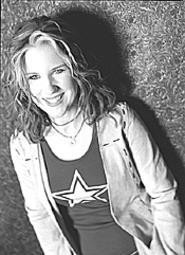 Don't call Nashville-based singer-songwriter Jen Foster a lesbian folk artist. She is one, mind you; just don't call her one. "It's a label that stereotypes and doesn't do justice to the depth of a person," she says. "I would prefer if I wasn't thought of that way. It's a part of who I am, but it's not all of who I am." Foster's debut album, Everybody's Girl, finds love, hate, and at least half a dozen other emotions in all the usual places. That inclusiveness is no accident, she says. "My music is pretty universal," the Texas native explains. "It has the potential to be accepted in the mainstream. I don't think about targeting audiences when I write. I'm thinking more about crafting really good songs." Foster is at the Lime Spider (207 South Main Street in Akron) at 9:30 p.m. Saturday. Tickets are $5 and $10; call 866-468-3401. -- Michael Gallucci

Luck Be a Lady

Little has been done to update Porthouse Theatre's production of the 54-year-old Guys & Dolls, says artistic director Terri Kent, who's directing the season's final show. "It's a pretty straightforward, classic story," she says. "It doesn't require any twist on the concept. We're drawn to the nostalgia of that era." Frank Loesser's musical -- about a gambler, his tolerant girlfriend, another gambler, and the missionary he falls for -- is timeless theater, Kent says. "The basic premise of the story is eternal. Find the person you're supposed to be with the rest of your life, and be in love." Guys & Dolls opens Thursday and runs through August 8 at Blossom Music Center, 1145 West Steels Corners Road in Cuyahoga Falls. Show times are 8 p.m. Tuesday through Saturday and 2 p.m. Sunday. Tickets range from $18 to $23, available by calling 330-929-4416. -- Michael Gallucci

Rowland Stebbins is a New York City folkie who's remade himself as a Nashville singer-songwriter. He's twangy one minute, rootsy the next. His last album was 2002's All Over. He has a bunch of new songs, which you can hear when Stebbins and his band, the Sons of Bachelors (which includes two members of Cleveland-based '90s rockers Lucky's Diamond Band), play the Barking Spider Tavern (11310 Juniper Road; call 216-421-2863) at 8:30 p.m. Friday and Open Air in Market Square (at the corner of West 25th Street and Lorain Avenue; call 216-781-3222) at 1 p.m. Saturday. Admission to both is free. -- Michael Gallucci