Everyone’s falling in love in Two Gentlemen of Verona, at the Ohio Shakespeare Festival 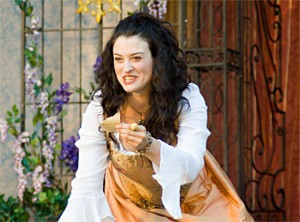 As light Shakespearean comedies go, Two Gentlemen of Verona is about as helium-filled as any, trotting out all the expected plotting devices (disguises, buffoons, surprise revelations, etc.) without any deeper thoughts at work.

And none of that is a problem, as long as the cast can keep the pace brisk and the wordplay engaging. Under the direction of Terry Burgler, this Ohio Shakespeare Festival production succeeds more than it fails, but ultimately, it falls just short of total comedic liftoff.

All the humorous angst revolves around Proteus and Valentine, two young men who find themselves falling for (respectively) Julia and Silvia. But once Proteus eyeballs Silvia, he is gobsmacked by the lovebug and prevents Silvia and Val from eloping, so he can woo the lovely lass himself.

Meanwhile, the spurned Julia disguises herself as a page to get near Proteus, who is busy pretending to help still another Silvia admirer, the clownish Thurio. Through Thurio, Proteus plans to get cozy with the almost fatally popular Sil, since he knows she won't give him the time of day otherwise.

In the two leading roles, Andrew Cruse and Andy Nagraj offer crisp presentations of Proteus and Valentine, although Cruse's characterization veers close to parody at times. Lara Mielcarek is a treat as Julia, and her self-lacerating speech as she pieces together a love note from Proteus that she tore up earlier is a small gem. In the role of much-adored Silvia, Katherine DeBoer is a bit uneven, forcing her reactions in the first act, but then settling into her character in the second.

Adding to the fun are the manservants, Speed and Launce, who attend the two lover dudes. Ernie Gonzalez as Speed has a huggable stage presence and garners many laughs with his matter-of-fact delivery. And Timothy H. Champion's beautifully timed comical rendition of Launce is almost upstaged by his dog companion, an adorable canine that, poor thing, cowers in fear whenever anyone raises his voice.

The scene in which they review the virtues and vices of a woman Launce is attracted to is a merry cavalcade of old Will's wit. Speed notes that, among her vices, "She is slow in words." And Launce disagrees, saying, "To be slow in words is a woman's only virtue." As for the fact that she has no teeth, Launce replies: "I care not for that, because I love crusts."

Director Burgler is a past master at staging Shakespeare, and here he has assembled all the requisite parts. But due to soft performances in smaller roles and some missed beats throughout, this light-as-air chiffon of humor sags ever so slightly in the middle.