Everything Changed for Ohio State's Cardale Jones in a Year. Does He Have to Change Too?

Cardale Jones took off on another Twitter spree two weeks ago. He does that. But this time, the guy once best known for famously tweeting that he didn't come to Ohio State to "play school" was taking on social issues and incisively beating back condescending replies.

This particular late July day's thoughts started with Jones sharing the #BlackLivesMatter hashtag. Then discussing the #AllLivesMatter responses he received. Then making national headlines with his retort to someone who told Jones to "worry about getting us fans another national championship...stay out of this bullshit.""Sorry Mr. master," Jones replied. "I aints allow to tweet nothing but foolsball stuff I donts want you to think I more than a foots ball playa sir."

Even Buckeye haters had to love it; many of them tweeted as much. The territorial lines are drawn hard and fast in college football, and in recent years many have looked at the Big Ten with a mix of hatred and pity. They found bogeymen in Terrelle Pryor and Jim Tressel, for different reasons. In Jones, champion of college football and Twitter and eating at Chipotle, even parochially inclined SEC diehards have found someone worth enjoying — and maybe even rooting for.

The Year of Cardale rolls on. Like he did with a first-drive touchdown pass in the Big Ten Championship, and later when Alabama's Landon Collins tried to take him down in the open field in the Sugar Bowl, he's crushed it.

From afterthought on the cusp of having to transfer to winning three trophy games and having to turn down the NFL, Jones has turned six weeks to savor into a seven-month run of success and fame. Since last Nov. 29, when he went from never having played a significant down to being thrust onto the national stage after J.T. Barrett broke his ankle against Michigan, the 22-year-old Cleveland native has grown up fast and in front of a growing audience and has shown no signs of slowing down or even needing a breather.

Once a frequent visitor to the office of Ohio State coach Urban Meyer to discuss questions of maturity and focus, Jones and his coach raised the national championship trophy together in Dallas last January, then huddled together in Cleveland 48 hours later to discuss whether Jones would immediately ride his momentum to the NFL. Those meetings were initially private but not much else has been for Jones, who's become one of America's most talked-about athletes while still convincing people that he's actually a student-athlete, not a bored jock whose strongly worded, ill-timed tweets landed him a long-lasting place in Meyer's doghouse his first year in Columbus.

For those keeping tabs: Jones went from an inner-city high school, to one year of military school, to one year as a redshirt, to two years mostly watching and then, finally, one of the most improbable, out-of-nowhere success stories anyone can remember — three starts, three trophies, three of the biggest wins in Buckeye history — to not even being guaranteed the starting spot when Ohio State begins its title defense on Sept. 7. Barrett is healthy again, and the pressure is high with a camp competition for the starting job looming.

In what might be the most talented and complicated quarterback room in college football history, Jones is the only one in the room with prototype NFL size and skills, and the only one who's undefeated, on the field and on Twitter, where he shows a humor, a charm, a personality, and gives off a feeling his 15 minutes isn't going to expire anytime soon.

The question is this: Now that so much has changed, does he need to change too?

Ask Jones for the best story about being recognized or the best part about being suddenly famous, as I did last month, and that smile that can light up a stadium lights up the room.

"I got a lot of Twitter followers," Jones says.

The best guess of a couple people close to the Ohio State program is that Jones had around 17,000 Twitter followers when he entered that Michigan game in the fourth quarter. He had almost triple that the following week, more than 150,000 by March and at last count had 232,000.

Jones, lighthearted as always, was back to his normal dispatches by the weekend after the "Mr. Master" tweet, posting videos of himself performing pro wrestling-like maneuvers on a child at a swimming pool. He'll post an occasional Bible verse, words of wisdom passed along by some coach or a book or even an Internet meme, or his banal thoughts on what he plans to do — or not do — on a particular day. Jones ran the fella who told the QB to "stay out of this bullshit" right off Twitter altogether, and it wasn't the first time the superstar engaged in a debate on social issues. He can be a Twitter activist. But mostly, he tweets about burritos. 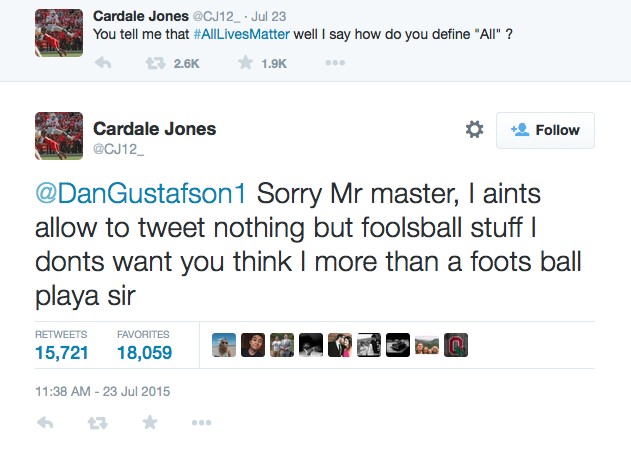 What we most know about the Cardale Jones Experience is that it's fueled by Chipotle, which conveniently has two locations on or adjacent to Ohio State's campus.

And that fame has come quickly. It's all very new to Jones.

"Just being in airports and people are just clapping and freaking out ...that's pretty sweet," he says. "But it's pretty weird too."

Not that long ago, he was a third-stringer sitting in his apartment playing Call of Duty. Now he's flying with Meyer to Los Angeles for the ESPY Awards and tweeting to UFC champion Ronda Rousey and famous-for-something Kylie Jenner about meeting up.

There's a newfound sense of responsibility that comes with that territory, to sign every autograph, to smile for every selfie, to try and oblige every reasonable request. (On that last front, Jones has plenty of his own. One example: He asked the Cleveland Indians — via Twitter, of course — to let him throw out a ceremonial first pitch; the team obliged.)

But there's also a struggle to act responsibly in very real and basic ways.