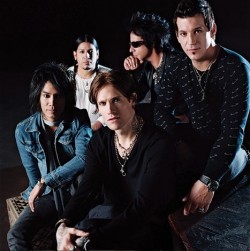 Early on, Buckcherry were marketed as a revival of Sunset Strip titty-bar metal, while Papa Roach crawled onto the charts from somewhere in the middle of the nŸ-metal pack. But each band has evolved from its origins, surviving record-label upheaval, breakups and reformations, and now they're touring together, demonstrating the resilience of American hard rock.

"I never felt like we were a Sunset Strip band," says Buckcherry guitarist Keith Nelson via phone. "We happened to be from L.A., and we were a rock band, but we were all too young to actually catch the wave from the Sunset Strip era."

The band's self-titled 1999 debut and 2001's Time Bomb mixed punk and hair-metal sounds into a distinctive, aggressive blend. Label problems and musical differences led the band to fracture in 2002, but Nelson and singer Josh Todd reformed Buckcherry in 2005, with a new rhythm section and a more traditional hard-rock sound, heavy on power ballads like "Sorry" and "Don't Go Away." The two albums they've released since reforming, 2006's 15 and last year's Black Butterfly, have been their most successful, commercially and artistically. These days, they're less Mštley CrŸe (with whom they toured last year) and more Social Distortion.

"I'm glad that other elements of our influences are coming out over time, whether it's blues or punk or whatever it is," says Nelson. "I think it's just really taken time for it to evolve and come out. I'm super pleased with the way things are. I love the sound of this band; I love that we can put a song like 'Cream' on the album with a song like 'Rose' and it all makes sense."

Papa Roach has undergone a similar evolution. The band's debut CD, Infest, found them firmly within the nŸ-metal pantheon, offering rap-like vocals, funk-metal melodies and lyrics about suburban angst. But on 2002's lovehatetragedy and 2004's Getting Away With Murder, the band transformed into a more straightforward, punky hard-rock outfit. This has allowed it to play before a wide range of audiences, according to bassist Tobin Esperance.

"We've toured with everyone from Black Sabbath and Iron Maiden to Eminem and Ludacris and the Red Hot Chili Peppers and Suicidal Tendencies," he says via phone with some pride. "We've done it all, and it's more fun that way."

Like Buckcherry, Papa Roach are vets of last year's CrŸefest tour, and the two bands have more than that in common - they're also survivors of the ill-fated DreamWorks label. "It's funny, because I don't remember ever knowing those guys back in '99 or 2000 when DreamWorks was going on," says Esperance. "When we made our third record, Getting Away With Murder [for Geffen], that's when I met Keith [Nelson]. He was working in the studio where we were recording, guitar teching for us, and I was like, 'Hey, you were in Buckcherry.' He was like, 'Yeah, I'm jamming with the guys again, we're thinking about getting back together,' and we were all excited, like, 'Yeah, good luck. Hope everything works out for you.' It was really exciting to hear. And to see their success story, see them come out and really just take the world by storm with their comeback - it was really cool. And here we are playing before them, you know?"

"They should have called it 'Dream Doesn't Work,'" laughs Nelson. "That would have been more accurate. In a way, I'm really grateful to those people, because they signed the band, but the process of getting there was never fun, it was never enjoyable, and I think it played a major part in the demise of the original band. But things are better now, we're moving forward, and I'm not gonna name names or talk shit. That's history. Here we are, it's 2009, and things have never been better.

"All I can say is that it's a marathon, it's not a sprint," he continues. "Look around. A lot of bands we came up with aren't around anymore, and a lot of the bands that are around currently won't be around."

"I don't want to say 'mature,' because we're in a rock 'n' roll band, but there's no stupid shit going on. I'm sure we've all paid our dues in the 'let's fuck shit up and do as many drugs and have as many chicks as we can' department, so we're all kind of having a good time in a more positive and healthier way. I think in the end we're all rock 'n' roll bands who just wanna get out in front of kids who enjoy music and have a good time. With the exception of Saving Abel, 'cause you gotta have the new band that's out there rippin' it for the crowd, we're all bands that have withstood the test of time, and we all strive for longevity."