The man on the street was the comedic meat for '60s duo Coyle and Sharpe. 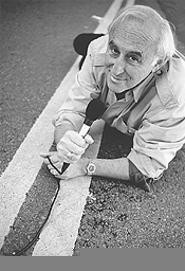 What would you say if two men approached you on the street and asked if they could drill a hole in your head and record your thoughts? This is the kind of situation that Jim Coyle and Mal Sharpe inflicted on innocent pedestrians as they walked around San Francisco in the early 1960s with a hidden microphone and a desire to make something interesting happen.

"People in the 1960s were much more naive, and we would sit around, trying to come up with things that we could confront people with," Mal Sharpe says via phone from his home in Berkeley, California. "You have to be like 24 or 23 to have this kind of concept in your life."

While you may not have heard of Sharpe, it's likely you've encountered his stuff -- he's done several national TV commercials, recorded bits for National Public Radio, and appeared on many television shows, including Foul Ups, Bleeps, and Blunders; USA Today; and Evening Magazine. He even did a few commercials in Cleveland. ("I did some stuff for this horrible little restaurant," he recalls. "I think it was Mr. Hero's -- it was the worst chain, but we did some great commercials.")

It all started when Sharpe met Coyle in a boarding house in 1961, and the two of them decided that they wanted to make a career out of playing with people's minds. At that point, Coyle had already established himself as a "harmless con man" who managed to trick his way into 116 different jobs (including a brief stint as a co-pilot for TWA) despite the fact that he had no experience and no intention of actually doing any work.

For the next two years, Coyle and Sharpe struggled to get by while they spent their days trying to convince perfect strangers to grow feathers on their bodies or to hang from a fishing pole at the airport. Forgotten in the '70s and '80s, Coyle and Sharpe were rediscovered by Henry Rollins in the mid-'90s, and Rollins released On the Loose, a compilation of their skits, on his label, 2.13.61. Audio Visionaries, the duo's latest disc (in stores January 18), is a collection of material from their archives that provides evidence of many of these encounters, including attempts to get people to participate in "mutational experiments" and to recruit cult members. One track, "Maniacs in Living Hell," has been selected to appear in the Whitney Museum's "American Century Sound Works Exhibit," which opens in New York on January 16. Don't let its high art credibility mislead you -- most of the humor on the disc isn't of the conventional sort, but instead comes from the pure terror and confusion that can be heard in the voices of the victims.

"You have to picture the two of us standing there, talking to people," Sharpe says. "We would always end up getting closer to them. They would be backing up until finally they were pinned to the wall, and we would be saying, "Please come with us, we want to open up your head.' That would be the fight or flight moment."

Not all the experiments worked. Coyle and Sharpe used to go into mortuaries and explain to the mortician that Coyle wanted to be buried alive so he could start his life over again.

"It never seemed to work out, because those guys are just so uptight," Sharpe explains. "The morticians would ask us who would be at the service, and we would tell them that there would be people and animals. The great moment was when the mortician would say, "What kind of animals?' and we would always improvise on the type of animal, trying to make each other laugh. There would always be a host of wolverines and zebras and weasels. Once, one of us said something, and the two of us just started to laugh. I remember we got completely out of control. We were rolling around on the floor of this mortuary, and the mortician was just sitting there. He had no idea."

It was a lean couple of years. Sharpe made $7 a night on weekends playing trombone in a jazz band, and Coyle's wife, Naomi, held a conventional job. These were their only means of support.

"We sort of survived," says Sharpe. "I had a girlfriend for a while who worked in this deli, and she would bring back unfinished sandwiches and things."

It was hard enough to explain their strange activities to their families, but it was even harder to explain them to the police. They managed to escape arrest on a few occasions by jumping onto streetcars when things went awry. They weren't always so lucky, however.

"We did get arrested once, and we were put in the Hall of Justice in San Francisco," Sharpe explains. "We asked some guy what the chances were that we could borrow his car for the weekend. He said he didn't know us. We said that when we brought the car back he would learn that he could love and trust other people. Evidently, he thought we were trying to rob him, so when we went down the street to interview someone else, the cops pulled up in this car and came out with guns. They grabbed the briefcase out of my hand -- they didn't know it was a tape recorder -- and they arrested us. They held us in jail and put us in a lineup the next day. It was kind of scary. We were going to trial three or four months later, and the judge took us in the back room. The tape recorder had been running throughout the whole arrest, and you could hear the cops bullying us, so the judge said, "If you guys never play this tape anywhere, we'll let you off.'"

Eventually, things looked like they were going to turn around for Coyle and Sharpe, when they landed a recording contract with Warner Bros. in the '60s and released their first album, The Absurd Imposters.

"The record came out, and we thought we were going to make a million dollars," Sharpe explains. "We had this chart on my kitchen door that started at zero and went up to like 13 million records and how much money we would make. We only sold 13,000 records. We got $500, and Coyle immediately lost his check in the lobby of the Fillmore Hotel in L.A."

Soon after, though, things really did turn around for the team. KGO, a radio station in San Francisco, offered them a job doing more of the same kind of put-ons that they had been doing on their own. "A lot of people thought we were really annoying. There were people who loved us -- mostly they were 14-year-old sick little kids -- and then, of course, there were people who thought we were just torturing people."

Coyle and Sharpe performed literally hundreds of put-ons over the air, trying to convince people to jump off of buildings, bury themselves alive, and wrestle in an underground pit with snakes and bats. The show was fabulously popular for a few years, and a television pilot was developed. Then, Coyle faked his death. According to legend, he quit the radio show to work for NASA, where he later died in a space shuttle mishap. Assorted newspaper articles tell other stories. One has him dying while digging a tunnel under Barcelona. Another has him starting a parachute store and eventually dying in an unsuccessful jump from an airplane. The truth is that Coyle got interested in Buddhism years before it was fashionable and went to live in a monastery in Sri Lanka. To this day, he remains at the monastery, where he has become an abbot. Ironically, the man who challenged the reality of the people around him with a barrage of words has since taken a vow of silence.

"He does get information to me once in a while, and sometimes he conveys to me ways that he would like to be remembered having died," Sharpe explains. "I think it is funny to see all these newspaper articles and read the different stories that have been told about his death."

Fake deaths aside, Sharpe admits that he couldn't have done the things he did without Coyle, whose knack for a good prank is rivaled only by the late Andy Kaufman.

"I met Andy Kaufman in the '70s," Sharpe recalls. "He definitely knew our stuff and really liked it. I have to say that Andy reminded me a lot of Jim Coyle. They both had this ability to carry something through, to get a look on their face that was almost frightening. It was like "I'm not kidding, I really am a werewolf' or whatever. It was kind of pathological."