In the season of sequels, '05 may be a pleasant surprise. 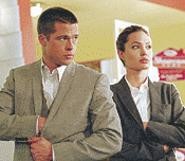 But in lieu of sequels come comic-book superheroes (Batman, the Fantastic Four) and small-screen retreads (Bewitched and The Dukes of Hazzard) and big-screen redos (The Pink Panther, Bad News Bears, The Longest Yard, The Honeymooners, Charlie and the Chocolate Factory, and War of the Worlds).

Of the 130-something movies scheduled to play this summer, a few will warm the hearts of the most air-conditioned critic. Ron Howard's Cinderella Man, starring Russell Crowe as boxer Jim Braddock and Paul Giamatti as his trainer, and Terry Gilliam's The Brothers Grimm, with Matt Damon and Heath Ledger, arrive without action figures and Happy Meals -- and bless their sunburned souls for trying to make art during a season of commerce. Perhaps it won't be such a long, hot summer after all. -- Robert Wilonsky

The following previews are written by Luke Y. Thompson, Robert Wilonsky, and Bill Gallo. Go to www.moviefone.com for up-to-the-minute listings of current releases.

Batman Begins
Starring: Christian Bale, Katie Holmes, Morgan Freeman, and Liam Neeson
Directed by: Christopher Nolan
Written by: David Goyer (Blade)
What it's about: This relaunching of the moribund franchise tells how Bruce Wayne (Bale) became the Dark Knight after seeing his parents executed in a Gotham City alley.
Why it will be fabulous: No Joel Schumacher, no Alicia Silverstone, no Batnipples. Did I mention no Joel Schumacher?
Why it will be dreadful: Because origin stories are boring, and because the idea of sitting through one more Liam Neeson "training session" is about as appealing as sliding down the Batpole naked.
Release date: June 15

The Brothers Grimm
Starring: Matt Damon and Heath Ledger
Directed by: Terry Gilliam
Written by: Ehren Kruger
What it's about: A fictionalized fantasy about the German fairy-tale authors, here portrayed as con men who lift fake curses, only to encounter a genuine form of black magic that will force them to deal with things they've only written about.
Why it will be fabulous: After Gilliam's aborted Don Quixote effort, The Brothers Grimm sees him back in fantasy mode, which is what he does best.
Why it will be dreadful: Its release was postponed for a year, as Miramax's Harvey Weinstein tried recutting it. His version then scored lower with test audiences than Gilliam's did.
Release date: July 29

Charlie and the Chocolate Factory
Starring: Johnny Depp, Freddie Highmore, and Helena Bonham Carter
Directed by: Tim Burton
Written by: John August
What it's about: Charlie Bucket (Highmore) finds one of the golden tickets that allows him to tour the candy factory of demented sweets-maker Willy Wonka (Depp). Also on the treacherous tour are the usual suspects, including Charlie's Grandpa Joe, Veruca Salt, Augustus Gloop, and the Oompa-Loompas.
Why it will be fabulous: There's no music this time, and Burton promises to go deeper and darker than Mel Stuart did in his 1971 Willy Wonka and the Chocolate Factory.
Why it will be dreadful: Because as much as you and I and everyone else love Johnny Depp, he ain't no Gene Wilder. And because, alas, "Pure Imagination" is a swell song that will be missed.
Release date: July 15

Cinderella Man
Starring: Russell Crowe, Paul Giamatti, and Renée Zellweger
Directed by: Ron Howard
Written by: Cliff Hollingsworth and Akiva Goldsman
What it's about: Depression-era boxing movie, with Crowe starring as fighter Jim Braddock.
Why it will be fabulous: Paul Giamatti might get to win that Oscar next year for his strong supporting turn.
Why it will be dreadful: Five words: "a film by Ron Howard."
Release date: June 3

Deuce Bigalow: European Gigolo
Starring: Rob Schneider and Eddie Griffin
Directed by: Mike Bigelow (a newcomer hired purely for his surname, apparently)
Written by: Rob Schneider and David Garrett & Jason Ward (Corky Romano)
What it's about: Sequel to the comedy that introduced the phrase "man-whore" into the wider lexicon. This time, Schneider's hapless Deuce is tricked into prostituting himself in Amsterdam, as more experienced hookers are being murdered.
Why it will be fabulous: The first one was surprisingly amusing . . .
Why it will be dreadful: Amusing films are a rarity in the Rob Schneider canon.
Release date: August 5

The Dukes of Hazzard
Starring: Seann William Scott, Johnny Knoxville, Burt Reynolds, and Jessica Simpson
Directed by: Jay Chandrasekhar (Club Dread)
Written by: Jonathan Davis, John O'Brien, Kevin Heffernan, Steve Lemme, Erik Stolhanske, and Paul Soter
What it's about: Based on the TV series, in which two lovable good ol' boys tooled around Hazzard County in their bright orange Dodge Charger, finding trouble at every turn.
Why it will be fabulous: Chandrasekhar reportedly keeps the proceedings as delightedfully mindless as their boob-tube inspiration.
Why it will be dreadful: Burt as the Duke boys' nemesis, Boss Hogg, could be the high point of this low-concept fare.
Release date: August 5

Fantastic Four
Starring: Michael Chiklis, Jessica Alba, and Julian McMahon
Directed by: Tim Story
Written by: Michael France, Simon Kinberg, and Mark Frost
What it's about: Four astronauts are bathed in gamma rays during an outer-space trip and are transformed, respectively, into the Human Torch, Invisible Woman, the stretchy Mr. Fantastic, and the hideous Thing. The superhero team, a Marvel Comics institution, battles its armor-clad nemesis, Doctor Doom (McMahon); chaos ensues, duh.
Why it will be fabulous: Because Marvel has managed to do the superhero movie thing right with the Spider-Man and X-Men franchises.
Why it will be dreadful: Then again, The Punisher, Daredevil, Elektra, and Hulk were super-awful, and the trailer looks fantastically horrid.
Release date: July 8

The Island
Starring: Ewan McGregor, Scarlett Johansson, Steve Buscemi, and Michael Clarke Duncan as "the Big Bald Black Guy"
Directed by: Michael Bay
Written by: Alex Kurtzman & Roberto Orci (Mission: Impossible III) and Caspian Tredwell-Owen (Beyond Borders)
What it's about: In the future, residents of a secluded facility all dream about going to "the Island," allegedly the last uncontaminated place on Earth. Naturally, it's all a lie: The Island is really a place where they get harvested for their vital organs.
Why it will be fabulous: Michael Bay made The Rock.
Why it will be dreadful: He also made Armageddon and Pearl Harbor.
Release date: July 22

Mr. and Mrs. Smith
Starring: Brad Pitt and Angelina Jolie
Directed by: Doug Limon (The Bourne Identity)
Written by: Simon Kinberg
What it's about: An unhappy married couple who earn their paychecks as assassins learn that they've been hired to kill each other.
Why it will be fabulous: The Pitt-Jolie twosome should be fun to watch under Limon's fast-action framing.
Why it will be dreadful: This promises to be a plot-heavy romp that could easily fire blanks.
Release date: June 10

War of the Worlds
Starring: Tom Cruise, Dakota Fanning, and Tim Robbins
Directed by: Steven Spielberg
Written by: David Koepp and Josh Friedman, based on the novel by H.G. Wells
What it's about: A family fights for survival amid an invasion of "alien tripod fighting machines."
Why it will be fabulous: Expect lots of special-effects dazzle in the Close Encounters/Jurassic Park style and more of Spielberg's characteristic empathy for the little guy.
Why it will be dreadful: Tom Cruise.
Release date: June 29