Hard rockers return with another set. 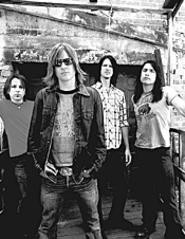 The Exies wasted no time returning to the studio after they wrapped up a tour in support of their debut album, 2003's Inertia. "When we got back, we wanted to capitalize on whatever momentum we had," says bassist Freddy Herrera. "We took off only two or three weeks. We didn't want to be out of the public's eye for so long. People forget so fast."

On their new album, Head for the Door (which was released in November), the L.A. rockers team with producer Nick Raskulinecz, who gave the Foo Fighters and Velvet Revolver a solid rock crunch. "We went into this record thinking that we wanted to write something that totally translates to our live show," says Herrera. "We wanted to try something different, but we wanted to keep it focused too. Nick helped us achieve that."

But unlike their hard-partying L.A. brethren, the four guys in the Exies are a little reserved. "We'll have a few drinks, but nobody's off the edge," Herrera notes. "You gotta take care of yourself." The Exies are at House of Blues (308 Euclid Avenue) at 7 p.m. Sunday with Breaking Benjamin and Theory of a Dead Man. Tickets are $19; call 216-241-5555. -- Michael Gallucci

The Swamp Boogie Band will be tossing green beads to fans this weekend, even if Saint Patrick's Day is over. "We're constantly throwing beads, or we make hats with flashing magnets on them," says Marcia Sindelar, the band's singer. "We make them part of the experience." The quintet has made some lineup changes, but Sindelar's 15-minute Janis Joplin medley is still central. "Our goal is for people to have fun," she says. "They have fun, we have fun." Music plays from 9 p.m. to 1 a.m. Friday at the Loose Moose, 482 West Aurora Road in Sagamore Hills (admission is free; call 330-468-2660) and from 9:30 p.m. to 1:30 a.m. Saturday at Fat Fish Blue, 1 Prospect Avenue (tickets are $5; call 216-875-6000). -- Cris Glaser