Eye in the Sky

Learn about the legends of the moon at this nocturnal hike 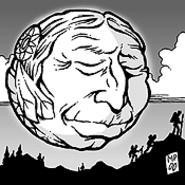 There's something peering over your shoulder, no matter where you go, but especially in the woods at night. Something that's been there for millions of years, watching over everything on earth. And some of the legends surrounding this nocturnal spy we call the moon will be revealed on the Legends of the Past full-moon hike around Kendall Lake in the Cuyahoga Valley National Recreation Area.

"[The moon] is so overwhelming and so distant," says Park Ranger Pamela Machuga, who will lead the 2.5-mile hike Thursday night. "There's some mystique about it. Most people live in the city, and the light pollution is incredible, but the moon is that one thing -- you might not be able to catch a star some nights, but you can always catch that moon."

Naturally, thousands of years of humans have built up quite a repertory of stories about the night visitor, from the superstitious to the surprisingly sublime. "I think they have a purpose," says Machuga of the tales. "I think, in a lot of ways, they teach lessons about how you should and should not act." They also have helped countless cultures remember when to sow, when to plant, and when to celebrate. Of particular interest to Machuga is the moon lore of Native Americans.

"We have our own stories about the heavens and the moon," she says of Western civilization. "And so do other groups, so I try to focus on their stories."

Machuga's favorite Native American moon stories deal with the coyote. Seems the wily critter wrangled himself into being the animal that got to go to the moon and watch over things. Once there, the coyote began to whisper the moon secrets he was supposed to be guarding and was quickly relieved of his post.

"People tend to think of the American Indian stories as myths," Machuga points out. "Yet we think of our stories as very real and meaningful. But their stories are just as real to them. I try to hit it from the similarities and try to bring out mutual respect."

But half the draw to the full moon hike is not the legends so much as the hike itself -- even in the cold and snow. "You experience things with your senses that you won't experience during the daytime," Machuga says. "If you really want to sit down and touch your soul, you need some natural elements to do that. It gives you a sense of being small."

Small, and being watched by an unblinking, silver eye.