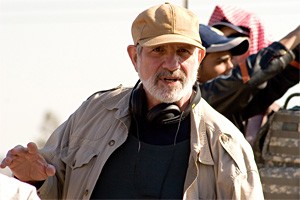 Brian De Palma is angry — angry about the war in Iraq, and angry that his Iraq movie, Redacted, has fallen victim to the same censorship it strives to protest.

When he finished his film — a kaleidoscopic re-imagining of the lead-up to five U.S. soldiers' 2006 rape and murder of a teenage Iraqi girl — it concluded with a montage of real combat photos of Iraqi civilian casualties. But then he submitted it to HDNet Films, the production company of billionaire Dallas Mavericks owner Marc Cuban, who financed the film. In the version that eventually screened at film festivals this year and is scheduled to arrive in Cleveland in December, the photographs are still there, but the subjects' eyes have been blacked out.

The film's distributor, Cuban's Magnolia Pictures, claims it blacked out the eyes to protect against lawsuits from the victims' families. But De Palma isn't so sure. In a heated (and much YouTubed) press conference this year, the filmmaker claimed Cuban "redacted" the photos because they "disturbed" him. De Palma then engaged in a spirited shouting match from the stage with Magnolia president Eamonn Bowles, who attempted to correct De Palma from the audience.

"Somewhere down the line, I think somebody in the company looked at [the photos] and said, 'Oh, my God — he wants to put these in the movie?'" a still wound-up De Palma, outfitted in the safari jacket in which he has weathered 40 years of real and ideological combat zones, tells me over lunch the next day. "When those bombs go up on TV, we only see the sparkles. But they do come down, and people are hurt. If I'm going to be financing a war that I'm completely against, I'd like to see the pictures of what I'm blowing up."

Having seen both edits of De Palma's film, I can attest that Redacted undeniably packs a greater wallop in its uncensored version. But even censored, Redacted is still a far grizzlier report from the front lines of Gulf War II than what we encounter on the evening news (unless your cable provider happens to carry Al Jazeera). And the Magnolia-imposed redactions only add an unintended layer to De Palma's complex questioning of the trust we put in recorded images.

Excepting the photographs at the end, Redacted is less documentary than docudrama — an elaborate roundelay of purportedly found images presented in a mix of traditional and new-media formats, shot in HD with a cast of largely unknown performers. The film begins as the video diary of a U.S. Army private and morphs into a French documentary about a platoon of soldiers manning a border checkpoint. Later, it becomes a Muslim fundamentalist website's streaming video of IED attacks on U.S. soldiers, and it sheds its skin nearly a dozen more times, including incarnations as American and Arab TV news reports, a website for video messages left by soldiers' wives, and surveillance-camera footage of soldiers' barracks. Each piece of the perspective-shifting puzzle was inspired, De Palma says, by things he encountered in cyberspace while researching the movie.

"I would come across things that I'd never seen before," he explains. "The soldiers' wives' website, the montage of the pictures — that was all there."

Redacted echoes De Palma's masterful 1989 Vietnam drama, Casualties of War. Whether Redacted, which arrives on the heels of a slew of acclaimed but commercially unsuccessful Iraq-themed features and documentaries, can connect with younger moviegoers — a generation that De Palma says has grown up "living in the green zone" — remains to be seen.

"The movie is saying that there are consequences of our invasion and occupation that you don't want to look at, or which are being kept away from your eyes," he says. "Of course, anybody who really wants to find out about these things can. But you encounter a certain apathy. 'What do you want to look at pictures of blown-up babies for? What are you, sick?'"