Metal vets subsist on a steady diet of club gigs. 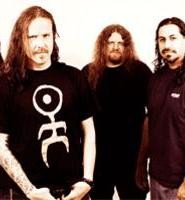 The members of Fear Factory may be entering their mid-thirties, but they have no intention of growing up and getting real jobs.

"We don't want to get jobs at McDonald's," says Christian Olde Wolbers with a hearty laugh. "Making records is fun. It's what we love to do most. As long as there are fans out there that want to see us, and we still feel like a band that's being listened to -- why not continue?"

In the '90s, Fear Factory released a string of classics that fused the animalistic brutality of death metal with the mechanical precision of industrial. On the 1998 opus Obsolete, frontman Burton C. Bell mixed grunts and melodic vocals before it became standard fare for the nü-metal scene.

By the release of 2001's Digimortal, Fear Factory was gasping for air. Bad blood between Bell and original guitarist Dino Cazares led to the band's temporary dissolution in early 2002. But contractual obligations to their label, Roadrunner Records, forced Wolbers and drummer Raymond Herrera to quickly reform. Eventually, they convinced Bell to give it a second shot.

Roadrunner dropped the band anyway, and Fear Factory could've called it quits. But without Cazares, the vibe was so congenial that the group released its fifth disc, Archetype, on the small indie label Liquid 8 Records. The disc seethed with anticorporate rage, seemingly aimed at the label that Fear Factory helped sustain.

If Archetype was safe, Transgression, the second and latest disc of new music the band has made since reforming, is a schizophrenic yet solid listen, proving that Fear Factory is more concerned with challenging itself than with wallowing in nostalgia. The band experiments with cleaner vocals, a thrashier sound, and more melodies while downplaying the electronics of previous releases.

Now in its 16th year, Fear Factory continues to tour behind a sound that has aged well in a radically different metal landscape.

"I feel like we moved on to the next generation," says Wolbers.

If great metal bands could copyright their sound instead of songs, the members of New York death-metal pioneer Suffocation would be millionaires. But like life, the music industry isn't fair, and the frequently copied band continues to tough it out on the road.

Guitarist Guy Marchais has firsthand experience of borrowing the band's sound. He was in Suffocation's earliest lineup back in the late '80s (prior to 1990's seminal Human Waste EP).

"I think my old band, Pyrexia, was the first Suffocation rip-off band," says Marchais. "There's a million bands that have drawn inspiration from Suffocation. I don't think it's necessarily bad. People emulate what they like."

Suffocation classics like Effigy of the Forgotten from 1991 and 1995's Pierced From Within set the template for legions of lesser bands. Death metal had stagnated into droll predictability when Suffocation infused the genre with superior compositions, odd time signatures, and elements of hardcore and thrash. Yet revolving-door lineups and infighting forced the band to throw in the towel by 1998.

By 2002, however, the members of Suffocation grew tired of nine-to-five work and reformed the group. Singer Frank Mullen quit his job in Nevada and returned to New York. And when original guitarist Doug Cerritto declined, Marchais stepped back into the fold. The band now tours the club circuit regularly, holding its own against a legion of younger imitators and emulators.

"Playing with [tour opener] Decapitated -- they're pretty sick. They're really technical," he says. "When I'm onstage, I'm thinking, 'I gotta play good. I'm getting old, and I gotta make sure I'm at the top of my game and be as tight as possible.'"

The band's latest full-length, simply titled Suffocation, bears this out. Unhappy with the production on its 2004 comeback, Souls to Deny, the band painstakingly labored over the new disc. The group doesn't change its sound so much as it carefully refines it. On previous records, searing guitars and thumping percussion overwhelmed Mullen's voice, but this time out, he's quite intelligible.

Crappy jobs no longer suck the souls from the Suffocation bandmates; the group lives off incessant gigging alone, something Mullen intended when he reformed the band.