November 12, 2003
comment
The Black Album Scheduled for release on November 14 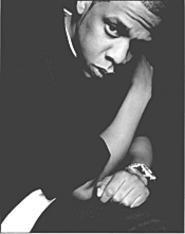 It's not easy getting into Jay-Z's recording home at Bassline Studios, tucked away on West 26th Street in Manhattan. I have to sneak in behind a woman walking into the building, take an elevator to the eighth floor, and knock on a pair of glass doors before a security guard ushers me into the reception area, where he quickly frisks me, relieving me of my tape recorder, and tells me to sit down and wait.

After several minutes, a Def Jam publicist takes me to a suite equipped with a large-screen TV broadcasting Denzel Washington's Gulf War epic, Courage Under Fire; there's also a pool table, several plaques containing classic jerseys by basketball legends like Isiah Thomas, and platinum discs for such Jay-Z albums as The Life and Times of Shawn Carter, Vols. 1-3. In half an hour, the room is filled to capacity with nearly 40 journalists, including a crew from XXL magazine (which, predictably, was featuring Jay-Z on the cover of its upcoming issue) and writers from Blender, Entertainment Weekly, and Spin magazines. There are so many of us, in fact, that the publicist returns to ask whether anyone wants to sit out the upcoming listening session for Jay-Z's highly touted eighth record, The Black Album, and reschedule for another time. No one offers.

We all cram into a small recording room, where Jay-Z sits at a console with the studio's engineer, Young Guru. Some of us end up sitting on the floor in the corner; I end up in an unfortunate position, standing right next to the massive speakers installed in the room's walls. "You guys ready?" Jay-Z asks. "Okay, this song is 'December 4,' and it's produced by Just Blaze."

"December 4" turns out to be a typically overheated Just Blaze production that somehow works to amazing effect, thanks to a loop taken from the O'Jays' "Something for Nothing," and despite the presence of Jay-Z's mother, who's speaking on the chorus as a children's choir harmonizes in the background. Think The Blueprint redux. "I gave birth to Shawn Carter on December 4. He weighed in at 10 pounds and 8 ounces," she intones.

"Ten pounds I was born/I didn't give her no pain," Jay-Z adds. While "December 4" is mostly autobiographical, the last verse finds him aiming at his critics, ending with the promise, "You can't respect that/Your whole perspective is wack/Maybe you'll love me when I fade to black."

Then there is "A Moment of Clarity," an Eminem production that borrows heavily from his mentor Dr. Dre's love of thunderous, stomping bass lines. "Lyrically I be like Talib Kweli," Jay-Z boasts, accurately describing his ability to match so-called "conscious rappers" for intricate wordplay. But really, both rappers are in a quandary: Kweli badly wants to make popular art; Jay-Z, a master at cranking out hip-pop classics, hungers for the kind of critical acclaim regularly (some would say hastily) awarded to Kweli.

Every song he plays, in fact, is an attack against the haters who call him materialistic, cold, and incapable of making truly uncompromising hip-hop. Unlike Prince's Black Album, this is no illicit, dirty-funk excursion, but an angry diatribe with all the subtlety of a Hollywood action flick; the last song he plays, "What More Can I Say?", ends with him slamming down the mic, yelling "Fuck this, man." Still, his lyrics sound as fresh and metaphorically rich as anything he's written. He raps, "This ain't the show, I'm just EQ'ing," which is probably one of the dopest lines heard all year.

The music, however, is another matter. The Eminem and Just Blaze tracks pass muster with flying colors. An offering from Rick Rubin is good, but one wonders what it will sound like, once the novelty of hearing Jay-Z over a rock-and-roll beat reminiscent of the Beastie Boys wears off. A number by Timbaland, "Dirt off Your Shoulder," sounds rote and mechanical; "What More Can I Say?", created by a new production team called Buchanans, outdoes Just Blaze in pomp and pretension, even adding a screeching chorus by Vincent "Humvee" Bostic. Worst of all is "Change Clothes," an unctuous offering by the Neptunes that outdoes the pair's "Excuse Me Miss" in pop ickiness. Of course, Jay-Z plans to make that the album's first single.

Although The Black Album is slated to have 12 cuts, Jay-Z plays only seven of them. "Seven is my favorite number," he says, with a mischievous smile. The other five include two more tracks produced by Just Blaze, two by the Neptunes, and one from DJ Quik. Afterward comes a short question-and-answer session. Most of the questions are asinine: "Did your mom write that herself?" one person asks Jay-Z, referring to the choruses on "December 4."

"I helped her out, but she did that herself," he answers. Then he laughs, "No, I didn't ghostwrite it."

In sharp contrast to the boisterous Black Album, Jay-Z turns out to be an extremely charming man, full of sharp humor that's regularly topped off with a shy grin. But his mood turns serious when one journalist queries him about a line from "Moment of Clarity": "I dumbed down my audience and clocked more dollars/They criticize me for it yet they all yell, 'Holla!'" Why does Jay-Z feel as if he has to dumb down his lyrics to gain commercial acceptance? asks the writer.

"If I release 'Song Cry,' I get 500 spins. If I put out 'Big Pimpin',' it's No. 1 for 13 weeks [on popular New York station Hot 97]," he says. Of course, "Big Pimpin'" is a great pop song, while "Song Cry" is a mediocre love ballad. These are distinctions that Jay-Z doesn't know -- or at least pretends not to understand. For him, each record is a gift for the public to consume, a means for him to make money as an entertainer. But it doesn't matter whether we like The Black Album. Jay-Z will still believe that he is the consummate rapper, with more hit records than the late Notorious B.I.G., more lyrical diversity than 2PAC, and more musical consistency than Nas.

Such a conceit smacks of arrogance, but who can blame him? After all, Jay-Z is the artist, and we are the audience. Our acceptance or rejection of him doesn't change that. "I don't know," he finally shrugs, in response to the journalist's question. "I haven't figured out the world."