Lizz Wright is the country girl who belts out the sounds of the city. 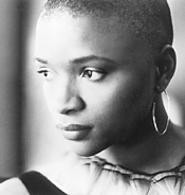 Lizz Wright never wanted to be a jazz singer. She got her start in church and was studying choral and classical music when secular music stepped in. "I only started singing jazz a couple of years ago," she says. "I'm still searching for my own voice and my own ideas. I'm still open to different things."

These days, a month away from the release of her debut album, Wright continues to steer clear of jazz convention. "Lately I've been [listening to] Björk and Radiohead," she says. (Wright opens for Al Green at the Palace Theatre Friday, as part of the Tri-C JazzFest.)

But it's a good time to be a young jazz singer. Norah Jones cleaned up at this year's Grammys and sold more than five million copies of her debut album. It's a breakthrough that gives Wright, 23, plenty of reason to be optimistic. "Norah's had a lot of success doing her own music with her own sound, and she's done it on a label [Blue Note] that's traditionally known for jazz. That's a great thing for her and a lot of other people.

"The most important thing for me is to realize my own potential. [Jones's success] inspired me and made me feel that this could happen, doing my own stuff."

Wright's first album, Salt, will be released May 13 by the venerable jazz label Verve. A lot has been invested in her: top-notch producers (including Tommy LiPuma, who's worked with Natalie Cole, Diana Krall, and Barbra Streisand), players (Brian Blade and Danilo Perez, among others), and songs (Chick Corea and Mongo Santamaria covers, as well as a track written specifically for Wright by Blade). "The songs took care of themselves," Wright says. "I have so much to learn that I'm a little bit uncomfortable about trying to prove myself."

Verve must hear something there. Wright wrote or co-wrote five of the album's cuts. And like jazz chameleons before her, she transcends the genre. Salt is rooted in jazz. But it's also blues, pop, and gospel. "I had to grow into my own sound," she says.

"The album took on a lot of different phases. It was a year and a half in the making. I was given space to evolve, and Verve trusted it would happen at the right time. Which is pretty risky, considering my background and that this is my first record."

Wright recently relocated from Georgia to New Jersey. It's a move directed toward making her more urbane -- more up to jazz's urban standards. But Wright's still a country girl, the gospel singer who wasn't allowed to listen to anything but spiritual music growing up.

Today, she's making the most of her jazz crossover. "I'm interested in learning the options and potential for lyrics, and how music can be shaped around it," she says. "Jazz is the music of time and the music of life. It can capture a moment. Jazz matters and will always matter. It's like a photograph of what's going on and where we are."