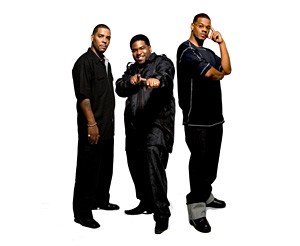 It wasn't long after Gerald Levert passed away a year ago that his younger brother Sean began thinking about getting a reformed LeVert back on the road. Some fans might question the timing; others might wonder, What's the point? After all, how could the Cleveland-based R&B trio survive without the big voice and equally large personality of frontman Gerald Levert?

As the reconfigured group (with newcomer Dwight Thompson filling Gerald's spot) prepares for a hometown show this week, Sean Levert appreciates the skepticism. "People want Gerald — we know that," he says. "We just have to make good music and put on a good show." Simply put, Sean responded to his grief by pulling the group back together. "We can't stop — this is what we do," he says. "I'm not just gonna give it up."

Clearly, the same underdog spirit that kept Gerald working so hard throughout his life also consumes his 39-year-old brother. And just as Gerald never believed he got full credit for a solo career that produced many hits, but much less ink than flashier, less-talented singers, Sean says there's unfinished business regarding LeVert. "You see a lot of places where other groups from our era get mentioned and LeVert doesn't get mentioned," he says. "I don't think we've ever gotten our just due."

It's a fair point — especially when you consider that LeVert released seven chart-topping albums over a dozen years. In addition to the 1987 crossover singles, "(Pop, Pop, Pop, Pop) Goes My Mind" and "Casanova," LeVert (which also included pal Marc Gordon) scored 10 Top-10 R&B hits, including the no. 1 singles "Addicted to You," "Baby I'm Ready," and "Just Coolin'."

LeVert's showbiz tradition begins with Sean and Gerald's father, Eddie Levert Sr., a member of the legendary O'Jays. But while that group holds a spot in the Rock and Roll Hall of Fame, and is widely acknowledged as one of the greatest acts of its era, such universal respect has mostly eluded Eddie's sons.

They worked hard to please both their fans and their dad. Sean recalls that his father "really didn't want us to be in this business. But he just couldn't stop it. When I was about 10 years old, the O'Jays were playing [the Richfield Coliseum], and it was sold out. We asked him if we could open the show. We didn't have no record out. We hadn't practiced or nothin'."

When LeVert finally hit the big time in the mid-'80s, there were rumors that Dad had pulled some strings. They didn't take any shortcuts, says Sean. During the early part of the decade, Eddie kept Gerald and Sean on the midwestern "chitlin circuit" to hone their craft and pay their dues. "Little clubs and bars in Cleveland, Canton, Youngstown — we worked hard," Sean recalls.

At the same time, Gerald and Marc Gordon were writing songs they hoped would satisfy Eddie's exacting ear. "He would tell them, 'Y'all ain't ready yet,' over and over," says Sean, who remembers the day Eddie finally liked what he heard and said, "This sounds like it's it."

Those first compositions laid the foundation of LeVert's 1985 debut, I Get Hot. The hits soon followed, carrying over to Gerald's solo career throughout the '90s. At the time of his death — at age 40 in November 2006, from an accidental overdose of prescription drugs — Gerald was working on new LeVert recordings with his brother and Gordon.

What will happen to those songs "is something we're still trying to figure out," says Sean. "Do we revamp them? Or do we just wanna keep them as a memory?" The group plans to release a new album sometime next year. Gerald's replacement, Thompson (a former member of the Cleveland-based Rude Boys), was selected in part because of his longtime ties. His brother used to play sax with LeVert. Besides, "We really didn't ask [Dwight to join]," laughs Sean. "He just snuck his way in. We started rehearsing, and he was just there. He just kept stepping up to the plate."

And even if the guys are moving a little slower these days, Sean notes that LeVert's mellow repertoire always came closer to classic soul than to the hip-hop-inspired new jack swing that most of its contemporaries played. Still, the showmanship that Eddie insisted his sons develop back in the day remains an integral part of LeVert's live performances. "You go to a concert, you buy the ticket, you gotta buy something new to wear," says Sean. "Might wanna buy dinner, some drinks. It could be a $300 night. If you don't put on a good show, people won't be back."

The guys of LeVert are Clevelanders through and through. Even their underrated rep mirrors the city's little-guy status. And like Cleveland, Levert's philosophy pretty much amounts to Just try harder. Still, says Sean, "I don't think Gerald ever understood how much people loved him. I think if he could've seen the memorial service people had for him, he would've been surprised. One of the reasons we wanna keep this going is for Gerald. We gonna make people remember."