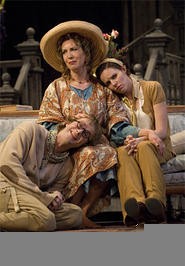 Imagine living in a home where every question comes off as an interrogation, a kiss on the cheek is interpreted as a lifelong commitment, and virtually every minor event is loaded with cataclysmic import. Sound like a training camp for drama queens run by Donald Trump and Star Jones?

It's actually Noel Coward's Hay Fever -- the first of his arch and oh-so-droll drawing-room larks set in the 1920s English countryside. The broadly exaggerated Bliss family and their more sedate friends pose intricate challenges for any theater company. And the Great Lakes Theater Festival players succeed, albeit intermittently, in gaining control of the sophisticated slapstick at the core of this comedy of manners.

The quartet of characters at the heart of the work are the Blisses: ex-actress diva and mother Judith, her self-absorbed novelist hubby David, and their two grown children, Simon and Sorel, who are each aggravatingly eccentric in their own ways. Using a basic, sitcom-deep setup -- each of the Blisses has invited an opposite-sex guest to their manor for the weekend -- Coward creates the fun with lilting dialogue and bon mots delivered by each of the eight characters (plus housekeeper Clara).

The proceedings begin disappointingly, however, with Sara M. Bruner and Jeffrey C. Hawkins (as Sorel and Simon, respectively) vocally overprojecting their lines while trying to establish their family's odd perspective on the world. But things look up when Kathleen Pirkl Tague enters as the irrepressible Judith. Fresh from the garden, where this urban theatrical doyenne has been trying futilely to memorize the names of flowers, Tague easily commands the stage while putting down her progeny. She remarks dryly, "It was a great mistake not sending you both to boarding schools."

As Judith ruminates, she and her children seamlessly begin acting out a scene from one of her past productions, signaling how quickly this mercurial family lapses from reality to fantasy. This insight into the Blisses' penchant for nonstop playacting serves as an instructive guide for everything that follows. Soon, the onslaught of guests begins, and the wicket starts getting a bit stickier.

Meanwhile, Judith has summoned a pugilist, Sandy Tyrell (Lynn Robert Berg, exhibiting denseness somewhere between punch-drunk and puppy love), and Sorel has invited diplomat Richard Greatham. Judith admires Sandy's broad shoulders, but soon she pretends to be swept off her feet by the unsuspecting Richard, played with the proper tone of mystified pomposity by David Anthony Smith. When Judith offers to sing a tender love ballad for Richard (asking him to help by "leaning on the piano in an attentive attitude"), the amusing artificiality of the interactions is clearly delineated.

Indeed, Coward establishes all these two-dimensional guests so they can be used as props for Bliss family amusements. They play games like "Adverbs," in which people are called upon to perform an action in the manner of a selected adverb (in the case that's portrayed, winsomely); there are also quickly switched pairings and flash romances that run their course in the span of a couple minutes.

Fortunately, there are moments of Bliss-full self-awareness, as when Sorel admits, "We're totally lacking in restraint." And for the most part, the guests rapidly cop to the situation, with Myra observing, "This house is a featherbed of false emotions." But there are odd digressions -- like Sandy's hiccuping problem -- which reveal a lack of playwriting discipline (Coward was only 24 when he wrote this piece and was still learning his craft).

Finding humor in these mildly outrageous happenstances is fairly easy. But managing to make it all work without the support of interesting characters makes Hay Fever a daunting theatrical undertaking. And this somewhat uneven production, directed by Charles Fee, attests to that degree of difficulty.

Still, there are many chuckles to be had as the absurd confrontations build upon one another. And thanks to Tague, who never loses her focus as Judith, the manic proceedings eventually come to a fitting resolution: an odd family happily wallowing in its own pleasurable excesses.