The Griffin gang tops our pop culture picks of the week. 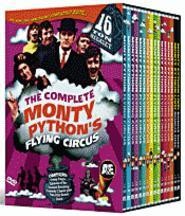 DVD/TV/CD/BOOK -- Bob Dylan: The bard of all media hits a grand slam with the Martin Scorsese-directed PBS doc No Direction Home (now out on DVD and as a rarities-stuffed soundtrack). Also available: the paperback edition of Dylan's rambling but totally captivating autobiography, Chronicles: Volume One, and the memorabilia-laden The Bob Dylan Scrapbook 1956-1966. Like a rolling stone, indeed.

DVD -- The Complete Monty Python's Flying Circus 16-Ton Megaset: A dead parrot and the Ministry of Silly Walks can be found among the 45 episodes culled from the comedy troupe's four-year television run. It's even better than Spam for breakfast.

BOOK -- The Complete Stories of Truman Capote: With not one but two biopics about the dynamic writer hitting theaters soon, now's a good time to revisit 20 of Capote's short stories about assorted misfits, imps, and intellects -- all of whom are a little bit like the author himself.

MOVIE -- A History of Violence: The Lord of the Rings' Viggo Mortensen plays a reluctant small-town hero, who resorts to a little old-fashioned ass-kicking when push comes to shove in this movie adaption of a graphic novel. Where are Frodo and Gandalf when you need them?

CD -- Pure Genius -- The Complete Atlantic Recordings (1952-1959): Everybody loves Ray. And there's even more Ray Charles to love in this seven-disc box, which includes more than 150 songs (plus a 1960 concert DVD) from the R&B legend's most fertile period. It puts Jamie Foxx's imitation to shame.

PRODUCT -- Robopet: From the folks who brought us Robosapien and Roboraptor comes this interactive digital doggy that rolls over, plays dead, and begs. No word on whether or not it sniffs other Robopets' butts.

CD -- You Could Have It So Much Better: The second CD from our favorite new new-wave band, Franz Ferdinand, embraces the same nonstop dancefloor grooves that made last year's debut so fabulous. It should keep the music supervisors at the WB busy for months.

COURTESY FLUSH, PLEASE -- Live at the Santa Barbara Bowl: Maroon 5, one of the decade's most insufferable bands, becomes even more unbearable on this tedious concert disc that includes "This Love" and "She Will Be Loved." Listen now, before they go the way of Hootie.