The grandson of a country icon shuttles between honky-tonk and headbanging. 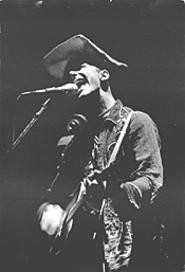 Hank Williams III's birthright guarantees him a spot on the Grand Ole Opry -- if he cares to follow certain stipulations. And he's been there. But recently, Hank's clocked more time on MTV's Headbangers' Ball, as bassist for the metal-hardcore crossover all-stars of Superjoint Ritual, backing former Pantera frontman Philip Anselmo.

"He's a fresh face that's going to be around music in general," says Anselmo. "He's got a hunger about music, and he gives a million percent of himself, and that's all I can ask for. He's talented, man. He's solid as a fuckin' rock."

Beneath a cowboy hat, the tattooed cowpunk is a dead ringer for his late, great granddad, and the rising outlaw hasn't turned his back on country. He starts his shows with a set of gritty, outlaw honky-tonk. Then the lanky singer-guitarist takes a break. He removes his button-down shirt, puts on a hardcore tee, and returns to the stage with a different backup band. Before they start, he warns the faithful who have come out to see country-western royalty perform that they might not like what's ahead.

The second band -- Assjack, it's called, and Hank describes the group as "louder and screamier" -- pounds out a heavy metal hellbilly din. Williams's twang is still present, and the vintage thrash moves with a pronounced swing, but it doesn't take 30 seconds to send much of the crowd home, holding their ears. Happens every night.

"I'm just doin' what I do, man," Williams says. "Havin' a damn good time, trying to jam with as many people as I can. That's what makes me me."

Williams put his innate ability to work, by turns singing and playing bass, drums, and guitar in hard, thrashy bands such as Buzzkill, Rift, and Bedwetter. Upholding family traditions for hard living never took him as far as the gutter, but he did party hearty. His dubious, sanitized Curb Records bio says that the young Williams had a "$300 a week pot habit."

"I always figured I'd get into country or blues," Williams says. "I just didn't figure it would be so quick."

"A one-night stand waited three years to tell me I had a kid," Williams explains. "And I had a judge sayin', 'Well, playin' music's not a real job.' So I had to go down and start dealin' with the awful stuff."

The division of the machine he signed with was Curb Records, home to the Judds, Tim McGraw, and Hank Jr. Curb introduced him with a can't-miss gimmick: An Unforgettable-style album that digitally juxtaposed Hanks I, II, and III. In 1996, the Three Hanks' Men With Broken Hearts reached number 29 on the C&W charts, but met with a politely tepid response.

"Thought it was the most shitty fucking idea in the world," says Williams. "I'm sayin', 'Wait maybe 15 years, and let me get my own following.' And they didn't. It was an honor to be able to sing with my dad and granddad. But I still hate that record. It's pretty cheesy."

Williams made his solo debut with 1999's Risin' Outlaw, a mixed bag featuring standout songs by Wayne "the Train" Hancock. After much ado, Curb grudgingly let Hank include some of his own tunes on his sophomore solo LP. Written entirely by Williams (except for a cover of Springsteen's "Atlantic City"), 2002's Lovesick, Broke, & Driftin' drew markedly better notices.

"There ain't no outlaws in country anymore," says Williams. "It's too clean and too pretty and too nice, too white. It's just pop, shitty, how-good-you-look stuff. And that just sucks."

Williams has a genuine aptitude for old-school country. In January 2003, the Grand Ole Opry hosted a tribute to Hank I on the 50th anniversary of his death. Hank III opened the show with Granddad's "Howlin' at the Moon." Opry host Little Jimmy Dickens, an old running buddy of Hank I's, commented, "That's a reincarnation, if I've ever seen one."

Hank Jr. also appeared at the show, but the two Hanks did not share the stage. Hank III says there isn't much of a relationship between father and son at present.

"I only see him a couple times a year," says III. "Just 'Hey, what's up?' He never listens to me, and that's just on simple bullshit. I wrote him a letter and told him don't forget he's an outlaw, and don't forget he wrote 'Whiskey Bent and Hell Bound.'"

In 2003, prompted in part by a lawsuit from his management company, Williams filed for bankruptcy. He hopes that one more record will settle his accounts with Curb, freeing him to pursue not just what's in his blood, but what's in his heart.

In country and metal, Williams has fans in high places. In 2002, former Black Flag frontman Henry Rollins invited Williams to appear on a benefit LP of Flag covers. Williams warbled and snarled through a punk rendition of the Flag classic "No Values."

"Hank kills the vocal," says Rollins. "Unbelievable performance, the best that song's ever been sung. And what a cool guy, you know? Thanking me five times for letting him be on the record. Like, 'Uh, no, pal, thank you.'"

Early on, Williams decided that contractual obligations to country wouldn't end his run in metal. He continued writing thrash material and has independently released four hand-cut, signed Assjack CDs in the DIY tradition of his underground heroes, such as the Misfits. Williams loves the hard stuff, but he doesn't consider whether he might have been happier staying at that level.

"Then I wouldn't have been able to say I sang with George Jones to Philip Anselmo," Hank says. "I had a path, and everything happens for a reason."