Carousel runs the musical classic through a meat grinder. 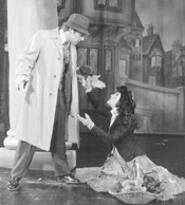 Most patrons will go to a theater to see a certain show. Yet they will make a pilgrimage to Carousel Dinner Theatre because of an ambiance that recalls a lost world. Anyone seeing My Fair Lady at this institution, the largest dinner theater in America, need hardly be reminded that the rewards have little to do with anything that Lerner and Loewe intended.

For those who remember dish night at the movies, nickel candy bars, and Jack Benny's parsimonious radio tirades, Carousel Dinner Theatre is a Shangri-La of bygone Americana. It's one of the last places that tries to keep the Norman Rockwell ideal of the American family alive; its signs urge patrons to "celebrate Easter Sunday or honor Mom and Dad with dinner and a show."

The exterior, in the shape of a concrete barracks, recalls a World War II parachute plant. The lobby, all in gold-flecked wallpaper and adorned with glass cases housing cheerful souvenirs, is early Vegas. For the convenience of bladder-challenged theatergoers, the bathrooms -- blue for boys and pink for girls -- have the show's audio pumped into the stalls.

The waitresses are guaranteed to call you "honey" as they take orders for entr´es fancifully named after the show's characters (Mrs. Pearce's Perfect Chicken Piccata, Freddy's Lucky Baked Scrod). The preshow is worth the price of admission. Popping from behind the silver lam´ curtain, the master of ceremonies, a sequined graduate of the Liberace School of Unctuousness, proffers salutations to all visiting groups, announcing birthdays ("To Helen on her 92nd and Aaron on his 11th!") and anniversaries ("Gladys and Butch, 22 glorious years!"). He also previews the next show, singing a queasy rendition of "Tonight" from West Side Story.

This all goes to forge such a jovial environment that audiences are willing to grant absolution to many a stage atrocity. If more of our theaters practiced this convivial policy, soggy Greek tragedies and wimpy musicals would take on an extra snap.

My Fair Lady, based on George Bernard Shaw's cerebral comic masterpiece Pygmalion with a champagne-and-caviar score, is not something that can be tossed together with the gracelessness of an infomercial. Director/choreographer Joseph Patton has taken Moss Hart's original platinum direction and reduced it to the basest tin. There are inexplicable howlers (such as the maids suddenly appearing in full uniforms at 3 a.m.), English accents by way of Wyoming, and actors who can't remember their own characters' names.

Hans Tester, who plays Professor Henry Higgins, is touted as a "New York actor" in the program. He gives one of the most dispiriting performances in the history of musical theater. With his jerky movements, overemphasized vowels, and blank expression, he brings to mind a marionette imitating Rex Harrison's legendary original. It is a minor miracle that Marni Raab's Eliza Doolittle, playing against such a robotic love interest, could conjure up so appealing and witty an interpretation.

It may be debated whether what is being presented could accurately be called My Fair Lady, since a musical is defined by its songs. Here, Frederick Loewe's luscious score, full of lilting strings and fizz, is tortured into elevator music by a Torquemada of a synthesizer. As the crowning indignity, the "Embassy Waltz" sequence -- the dessert of the show -- has been eliminated.

The whole experience can be likened to watching a faded, scratchy print of Ben-Hur at a drive-in, with the sound coming out of a transistor radio and the chariot race cut. These are the very compromises that can render beloved American institutions as pass´ as the eight-track player.

If stories of female victimization raise your hackles, Red Hen Productions' superbly crafted Gum should have you hitting the roof. It's set in one of those nameless faraway countries that used to trade in flying carpets and genies before they switched over to the zealous sexual oppression of young girls. Karen Hartman's sizzling frying pan of a play tells of the consequences that result when two rich young Muslim debutante sisters take on the promiscuous ways of Americans.

Once again, Red Hen shows itself to be a wise old bird. Under Shelley Butler's vivid direction comes a gorgeous production; its provocative silhouettes are reminiscent of the lush beauty of Maxfield Parrish's Arabian Nights illustrations, brilliantly contrasted against the evening's mounting horror. The splendid cast is so authentically Middle Eastern, we can almost smell the jasmine perfume in the air.