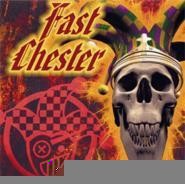 On its self-titled full-length debut, Cleveland-Akron trio Fast Chester hybridizes grunge and '80s metal. When the band is on, it can lock into a solid groove. When it's off, the songs sound like the musical love children of WASP and Seven Mary Three. Pop-metal girls will drool over singer-guitarist Angelo Incorvia's solos, and he occasionally ends vocal lines with tragically Eddie Vedderesque "yeah-uh-hayeahs." But originality isn't necessarily a prerequisite for rockin' out.

"Forbidden Fruit" showcases a catchy spiraling power riff and could be an anthem for leather-clad midnight marauders. Tracks like "Queen of Hearts" and "Suicide King" are caked in the Seattle-imported sludge that made 1991 hard rock so enjoyable. But the steadfast reliance on convention can be grating, and the songwriting is formulaic. Transitions often clunk -- "Chasing Dragons" careens haphazardly from southern rock to power ballad to thrash. But with tight grooves and solos, Fast Chester is halfway there.