An obsessive fixation turns into dating terror in Beck Center's Boy Gets Girl. 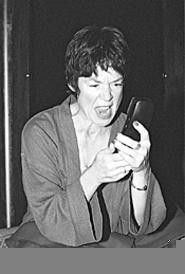 It's hard not to feel queasy, when Sting croons, in the Police's anthem for stalkers, "Every breath you take, every move you make . . . I'll be watching you." But that creepy ballad quickly delineates how one person's unquenchable passion becomes another's terrifying fixation. And sometimes that passion morphs into awful outcomes that destroy lives.

This issue and all its psychosexual ammunition have frequently been packaged as pop-TV fare. And indeed, the first half of Boy Gets Girl at Beck Center's Studio Theater plays so much like a Lifetime movie -- following, as it does, the maneuverings of an urban stalker and his prey -- that you can almost hear Jaclyn Smith pounding on the windows outside, pleading to know why she wasn't cast. But we are saved a plunge into the predictable "woman/victim-becomes-woman/hero" tripe by playwright Rebecca Gilman's refusal to tie up loose ends, a crisp Beck production under the steady hand of director Sarah May, and a compelling performance by Elizabeth Ann Townsend.

Townsend plays Theresa Bedell, a work-obsessed New York City journalist at The World magazine, who tips a beer one day, on after-work blind date, with computer-technician Tony, a slightly younger man without her literary knowledge (he's never heard of novelist Edith Wharton) or her passion for the Yankees. So what does blank-slate Tony like to do? Theresa finds out, after she firmly cuts short their second date due to profound incompatibility: She starts receiving bouquets of flowers and waves of phone calls at work and on her cell phone, as well as messages on her unlisted home number. Tony even pops up at her office for an unscheduled and unwanted lunch date, and then accuses inhospitable Theresa of being afraid of intimacy.

Since we all know where this story line is going, Gilman uses more characters to introduce various perspectives. Balancing the take on the male objectification of women is an offbeat interview subject of Theresa's, a Russ Meyer-like seventyish pornographer-turned-cult-hero named Les Kennkat, who unabashedly adores filming enormous female breasts against a backdrop of treetops and clouds. After a couple of feisty Q&As, Theresa develops a fondness for the randy old coot, who represents the happily harmless flip side of Tony's sick perversion. A later scene in a hospital, after Les's colonectomy, shows that even feminists and fetishists can relate to each other on very human levels.

Back at the magazine office, Theresa has a couple of ineffectual male friends: her editor, Howard (pitch-perfect Robert Hawkes), an older man who's concerned but clueless, and a younger staff writer, Mercer (James E. Savage Jr.), who's equipped with Oprah-like empathy, but who also has an eye toward spinning Theresa's ongoing trauma into a feature article. Meanwhile, Theresa's assistant, Harriet (played to a ditzy fare-thee-well by Betsy Kahl), is inadvertently helping Tony harass her boss, and police detective Beck (Rose A. Leininger) can do little but urge that Theresa change her entire life, along with her name, to protect herself.

It soon becomes clear that playwright Gilman is intent on making significant points about the often distorted interactions involving men and women (make that men against women). And at times her effort is too obvious, with some dialog becoming so didactic, one can almost hear the chalk scratching across the blackboard and the teacher's pointer rapping out fact after fact. There is also awkwardly timed exposition as well as some glaringly off-kilter details -- Theresa's editor at one point tells her that she only has to write articles about things that make her happy (yeah, right), and Tony stalks Howard and Harriet to augment his pursuit of Theresa, making him a highly unusual multitasking perv. But Gilman's biggest misstep is having stranger-turned-instant-stalker Tony disappear after intermission (other than to be glimpsed in shadowy scene changes). This turns him into a symbol of male treachery and/or outright psychosis, rather than a fully realized character, and undermines the dramatic flow.

Paul Kaiser, although a bit wooden, balances Tony between clumsily naive and purely evil. In the delicious role of Les, Donald Krosin wonderfully underplays his lechery to maximum comedic effect. But Theresa is the show's centerpiece, and Townsend's performance is perfectly natural and devastatingly real, sliding from incredulity to rage as she witnesses her life and very identity being shredded by one cretin's monomania. Townsend can also be wryly amusing, especially when she forgives Harriet for handing Tony her home number, even as she terminates her assistant's employment.

Thanks to director May's exceptional ability at drawing out believable performances, Boy Gets Girl rises above potboiler status and triggers many thoughts about how the males and females of our species make connections, along with a hollow feeling regarding our naked vulnerability to the predations of others.