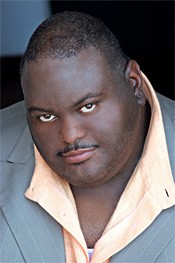 Lavell Crawford admits he's one of "two fat brothers" on the BET network. Just don't mistake him for the other overweight black comic, Bruce Bruce. "I'm so sick of people getting us mixed up. I ain't got nothing against him. But damn! That ain't me," says Crawford, who's in town for a six-show run in the Flats. "Bruce Bruce got his own high blood pressure."The who's-who confusion has settled down since Crawford took the runner-up prize last summer on NBC TV's Last Comic Standing. In the past six months, he's recorded his debut CD, Takin' a Fat Break, and snagged face time on BET's Comic View as well as Showtime at the Apollo and HBO's Russell Simmons' Def Comedy Jam, with a bag of gags about food, his weight, and crack cocaine. "When you try to break up with it, it's like a pimp talking to you: 'Remember that time when you jumped off that 27-story building with that 20-inch TV, landed on the ground, broke all the bones in your feet, and you were still able to run to that pawn shop and sell that television? Who was there?'" says Crawford. "Crack is the only drug that will talk to you." Crawford's shows start at 8 tonight, 8 and 10:15 p.m. tomorrow and Saturday, and 7 p.m. Sunday at the Improv, 2000 Sycamore Street on the West Bank of the Flats. Tickets are $21. Call 216-696-4677 or visit www.improvupcoming.com.
Thu., Jan. 24, 8 p.m.; Fri., Jan. 25, 8 & 10:15 p.m.; Sun., Jan. 27, 7 p.m., 2008