You may not want to see United 93, but you should. 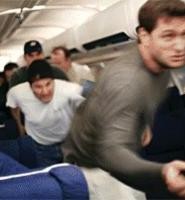 United 93 -- which uses the hijacking of one plane on September 11, 2001, to tell the story of what happened to all four aircraft seized that morning -- may be the most wrenching, profound, and perfectly made movie nobody wants to see. There is no reason to think that multiplex hordes anxiously await the arrival of this bummer blockbuster. Too many have insisted otherwise and at length, to the point of forcing New York City theaters to pull an early trailer containing scenes of the World Trade Center towers with their gaping, smoke-spewing wounds. But they are unavoidable in the film: Images of the smoldering towers broadcast by CNN loom over the shoulders of military men and air-traffic controllers throughout, hovering like ghosts. United 93 wants you to do more than remember -- it wants you to remember how you felt.

Universal, which is releasing the movie, and writer-director Paul Greengrass have said and done all the right things to placate those who accuse them of ripping at fresh wounds. They've emphasized the OK given by the families of those killed on that flight; Greengrass interviewed most of them at length, and talked to members of the 9-11 Commission and flight controllers who worked that day. They've promised to donate 10 percent of opening-week receipts to the Flight 93 National Memorial Fund. They've even cast in central roles real United pilots and flight attendants and some of the air-traffic controllers who were working that morning, bringing to this work of fiction a harrowing degree of verisimilitude that only ups the ante. Imagine reliving that morning over and over, take after torturous take, all for the sake of getting a bad thing just right.

Never mind that this moment has already been docudramatized for television, for the A&E Network's overwrought Flight 93, the highest-rated show in its history. Those who will forever view United 93 as a case of too much way too soon cannot and will not be placated by sincere gestures. They are right to say that none of us needs to be told once more what happened that day; we're reminded of it each time George W. Bush invokes the date to explain or excuse his actions since then. But that is precisely why United 93 needs to be seen: Even as a work of fiction, it wrests from politicians' sweaty hands the cynical battle cry that date has become and shrinks September 11 down to a human-sized tragedy. Those killed in the planes and in the towers and in the Pentagon are eulogized here -- mourned over, cried for, at last considered.

"It's going to be a good day on the East Coast," says an air-traffic controller -- words heard just after the movie begins in a dim Newark motel room, as four terrorists (played by Khalid Abdalla, Lewis Alsamari, Omar Berdouni, and Jamie Harding) prepare for their suicide mission. They pray in the early morning darkness; one shaves his chest and packs the weapons. It's as though they're off to a day at the office, as are many of the passengers on the San Francisco-bound flight that made it only as far as a Pennsylvania field. Greengrass more than once contrasts the actions of the terrorists with those of the folks on the flight; late in the movie, they're all shown praying -- in different languages, for different reasons, to different gods.

The filmmaker -- bound to a fever-pitch finale that would thrill, if it weren't intended to chill -- begins at a leisurely pace, with the hectic but mundane grind of the day-to-day. Passengers, many of them character actors whose faces are as familiar as their names are not, place cell-phone calls to colleagues and family members; even a terrorist utters into his mobile a final "I love you" before going on board. Flight attendants share crushes on maintenance men; pilots talk about growing children and hectic schedules. Even their final act, their attempt to take control of the plane after the hijacking, is portrayed as something prosaic: the inevitable last gasp of the desperate and doomed. It's to Greengrass' estimable credit that he does not underscore such things as Todd Beamer's "Let's roll!" proclamation, which is barely even heard here. It was just something said, two words only later mythologized by those who needed to latch onto such heroism to cope with such villainy.

Greengrass, who specializes in close-quarters thrills (The Bourne Supremacy) and real-life terror (Bloody Sunday), is a visceral filmmaker; you feel his stuff in your guts. But he does not stay aboard Flight 93 for the entirety of the movie: He cuts back and forth between various air-traffic control centers and military command posts, playing fly-on-the-wall doc-maker as he captures snippets of benign chitchats that turn into frantic, helpless wails as planes begin falling from the sky. United 93 makes irrelevant the in-the-works adaptation of the 9-11 Commission Report; Greengrass is as indignant toward panicked and absent government officials as he is respectful of the passengers aboard Flight 93. That, ultimately, is what makes this the perfect movie: You will feel something during every single second of it -- dread, fear, anger, hate, hope, and most of all grief, which is all anyone can ask of an endeavor such as this.