Getting to the bottom of rugby scrums. 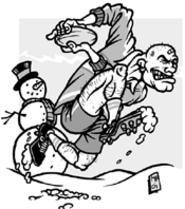 To the armchair quarterback, English rugby looks no more organized than a childhood game of Smear the Queer: One guy runs with the ball, everyone else tackles him. The Eastern Suburbs Rugby Football Club, which will host its 7's in the Snow tournament on Saturday, may not entirely disagree, but the game does have rules and points.

"When you tackle me, you're supposed to get up off me and make an attempt to get the ball," explains Matt "Jocko" Pinchak, who will captain the men's team at the tournament. "If you lay on the guy you just tackled, the referee's going to give the ball to the other side."

Pinchak does admit, however, that it's "pretty much a free-for-all. The object of the game is ball possession. When you got the ball, you're all on your own."

The ESRFC was founded in 1964 as the Cleveland Rugby Club, almost 150 years after the sport was invented at Rugby Boys School in England. In 1998, the club inexplicably changed names after it merged with the West Side Rovers -- a story the sports pages somehow missed.

"It's kind of hard to generate interest," Pinchak admits, though last year the 7's in the Snow fielded 15 teams of seven players each. And he claims the club's tournaments usually have a good spectator turnout. "Everybody thinks they're Joe He-Man; then they come out for one practice, and the running aspect of it kills them. In rugby, you just keep going. If you get hurt, you better get your ass up off the field, because the ball will change direction and people will trample you."

Which isn't to say the sport is only for men the size of compact cars. The ESRFC also has a women's team, which plays by the same rules as the men. "People think that you've got to be huge to play rugby," Pinchak says. "Some of the best players I know are under 190 pounds. They're pretty much fleet of foot."

And he who runs, wins.