How one freaky U.K. metal band is becoming a mainstream sensation. 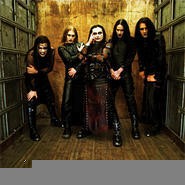 Cradle of Filth has been polarizing metalheads for 15 years. While the British band's fan base goes rabid for its symphonically pomptastic black/thrash song-suites, others just loathe the group. Hardcore black-metal fans resent them for getting lumped in with their hermetic and surly genre, accurately claiming that no band with such an obvious sense of humor and showbiz aesthetic could be "true" BM.

Its last three albums -- Damnation and a Day, Nymphetamine, and last year's Thornography -- have all been major statements, each one building on its predecessor's artistic and commercial success. The new disc is still ferocious, but it's also Cradle's most mainstream effort to date; its first single is a cover of Heaven 17's electronic-pop hit "Temptation." In a way, the band straddles the same line between extremity and pop that Celtic Frost did on the classic Into the Pandemonium record, which included a take on Wall of Voodoo's new-wave standard "Mexican Radio."

But most important, the band's success is a tribute to the work ethic of guitarist Paul Allender.

"I pretty much wrote all of [Thornography], barring two or three tracks," he says. "I wanted to push the band not toward the mainstream, but a bit more of a metal feel. Luckily, the fans have totally accepted it, and it's opened a lot more doors for us. We don't have to stick to the same typical style that was Cradle."

Indeed, the formula of lightning-fast riffs, thundering blast beats, and neoclassical flourishes and interludes (frequently provided by real orchestras and choirs, to label owners' dismay) has been expanded to include thrashy, more traditionally metallic guitars. This, in turn, has changed the atmosphere at shows quite a bit. "There's a whole front row of kids headbanging, which was never the case at any of our gigs before," says Allender. "It gives you a major buzz to be playing and see a whole bunch of 18-year-olds swinging their hair around. You think 'Fuck me, I used to be like that when I was their age.'"

This success has been a surprise to many -- perhaps none more than Allender himself, who left the group in 1996. "I didn't agree on stuff that was going on with the band," he recalls. "I can understand egos if the band's massive, like Metallica-sized, but we'd just recorded Dusk and Her Embrace, and I'm thinking, 'For fuck's sake, the band isn't even big, where's this ego coming from?' So I called it a day."

But he returned in 2000, at the request of his bandmates. Bringing with him an array of visual art and high-tech skills that he learned in the interim, Allender was ready to assert himself. Now, he says, "I do all the artwork for all the merchandise. I author and design all the DVDs. I do the website and all the photo manipulation for all the ads and the posters and everything."

At the same time, the band's working methods -- or lack thereof -- were as chaotic as when he'd departed. "Everyone was running around like headless chickens," he says. "Nothing was getting done on time, and I can't work like that. I have to be regimented. Things have to fall in a logical order. So when we came to this album, it was like 'That's it, I'm sorry, I can't work like this anymore. I'm taking the bull by the horns, and if people hate me for it, I don't fucking care.'"

Allender ascribes Cradle's notoriously high turnover rate -- the list of ex-members on its Wikipedia page is almost as long as the bio -- to this slack attitude. "I used to argue with people all the time, like 'Why are you doing it like this, man? Why don't you do it in a logical order like this?' And I'd just get abuse," he remembers. "And 9 times out of 10, the other people would leave. The writing would never get done, and I'd say, 'You're part of this band, and I'm fucked if I'm carrying anybody.'"

The only aspect of Cradle's music Allender has no hand in, apparently, are the lyrics of frontman Dani Filth. "It's a whole job on its own. I'd rather concentrate on making the music as good as it can be -- as catchy as possible. If the music rocks, and all the hook lines are there, and it's catchy as hell without the vocals on there, you know you're onto a bit of a winner," he explains.

Despite Allender's control-freak tendencies, he takes pains to point out that he grants latitude to his bandmates when arrangements are being worked out. "When I've got a whole [song], I'll give it to the rest of the guys and say, 'Look, change what you want, do what you want to it, see what you feel.' I try and get everybody involved, because I don't want the band to sound like one person. It has to sound like a band."

Allender's pretty sure Cradle of Filth is forever destined to alienate as many people as it enraptures, but he doesn't think the band has peaked yet. "I think we've got it in us to get bigger. We're too extreme to sell 10 million, but we might post another few hundred thousand on top of what we're doing already."

To that end, they're hoping to tour the U.S. at least three times before heading back into the studio. And with their newfound sense of discipline, they might just become known for more than a few clever T-shirts.