Fine, I'll Do It Myself 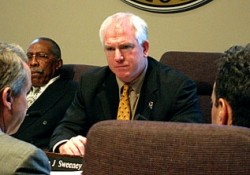 IT ISN'T EASY being on Cleveland City Council if you're maneuvering outside Council President Martin Sweeney's tenuous East Side majority. It's a little like being an elephant in the lion cage or a Democrat in Columbus. For some, it means having to work harder just to have your voice heard, only to be ignored in the end anyway. But at least you're putting pressure where the wound is.

That's the motivation behind a meeting at 7 p.m. tonight (Wednesday, March 4) at Applewood Center, 3518 W. 25th St. in Cleveland. Near-West-Side council members, stymied by Sweeney's behind-closed-doors excision of two council wards, want residents to have a say in how the new lines are drawn. After leading a successful charter change to reduce council this year from 21 to 19 seats, with a few more dumpings likely in the coming years, Sweeney now is working with a consultant to redraw ward boundaries based on a model of one leader per 25,000 residents. Many believe the unexpected bribery conviction of Ward 2 Councilman Robert White will make Sweeney's planning for the East Side a cakewalk; but it's still a toss-up what will happen to West-Side boundaries on April 1, Sweeney's deadline.

"It's Marty - and paid consultants - who are coming up with all this," says Ward 17 Councilman Matt Zone, Sweeney's most vocal critic.

On February 9, Zone submitted a potential resolution (bound to collect dust in committee) that encourages council leadership to join President Obama in creating "a new era of transparency, public participation and collaboration for all government."

Until that happens, Zone will have to be happy with efforts like the special meeting tonight, at which his colleague, Ward 15 Councilman Brian Cummins, will press for the implementation of another recommendation of Sweeney's now-disbanded charter review commission - Neighborhood Development, Planning and Service Districts. The special groups would be formed to assist council members in keeping in touch with residents and their concerns, essentially adding more voices to the decision-making process while the level of representation is being diminished.

"Once we take care of the initial redistricting, we should focus on that leading up to 2010," says Cummins, "because we'll probably have to [cut] another two more positions by 2013. If we're going to do that, then why not consider this service district recommended by charter review commission?" You're talking crazy, Mr. Cummins. Have you cleared your stance through the Council President? No? Shame. - Dan Harkins

GET USED TO DISAPPOINTMENT

Sweeney's not the only one playing favorites among council members. Mayor Frank Jackson has been exhibiting selective hearing as well.

Discussing how the administration compiled its $2-billion, 100-plus-project wish list for the federal stimulus money, Jackson's Chief of Government Affairs Valerie McCall told Tom Beres Sunday on his WKYC-Channel 3 Between the Lines show that Chief of Staff Ken Silliman had spoken "to each and every council person to get their priority projects for their wards." Councilman Zack Reed, who was surprised to see an "unneeded" $2.5 million project for new pavilions at Luke Easter Park on the list, says his meeting with Silliman is news to him.

Other council members opposed to Council President Martin Sweeney's majority hold say they were never approached either. "I have no record of it," says Ward 15 Councilman Brian Cummins. "The council leadership has not done anything to pin the administration down and have them come over here and get council's help." Maybe if everyone signed a gag order and agreed to vote in lockstep, then their help would be appreciated. - Harkins

About once a semester, The Kent Stater, the university's daily rag, publishes an editorial piece that sparks argument and dissent among its readership. Last year, it was a rant about Black United Students being unwelcoming towards a white activist who wanted to help their cause. This year, everyone's getting all bent out of shape over a recent op-ed that suggests virgins are no fun.

It's the sort of article that, 40 years ago, would have instigated a few orgies and some free weed for the writer. This is, after all, the place where a revolution almost began (until the National Guard started killing people). But it appears the hippies have been replaced by prudes. Student Sarah Caplin responded with a column of her own - "Why wait until marriage? Because it's awesome!" - which was published Friday. "I feel society has completely twisted the meaning and purpose of sex," she writes. "Sex is the ultimate physical expression of love." She goes on to claim that "You cannot 'test drive' a human being." Are you sure? Bob Serpentini smiles a lot. - James Renner