Inspiration can come from unexpected places -- even infected nether regions. 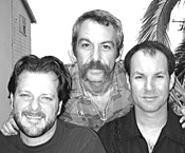 Four years ago, Mike Watt was all set to record an album about his cat, a longtime pal that accompanied the 46-year-old bass player on tours with the Minutemen, Firehose, and assorted friends (like Eddie Vedder and Dave Grohl). Then a long-undetected internal abscess in Watt's perineum (it's, um, the space between the anus and the scrotum) led to severe flu-like symptoms that almost killed him. Unable to play music, move, or really do anything, Watt rethought the kitty concept. "I wanted to write something of the moment," he explains. "Then the sickness came down on me, and the idea of being in the moment was very real. There's no past or future when you're hurting like that."

Watt's third solo album, The Second Man's Middle Stand, tracks the entire painful ordeal. The details are in the songs: "Puked to High Heaven," "Bursted Man," "Tied a Reed 'Round My Waist," "Pissbags and Tubing." "It left a deep impression on me," sighs Watt.

Now healthy and back to poppin' notes in songs that blur the line between art-rock and post-punk, Watt (pictured, center) sounds invigorated. The Second Man meanders along the same path Watt's been rambling down for the past quarter-century, but there's newfound and hard-earned joy in the grooves. "Records are springboards to take chances with," he says.

Through it all, the music has kept him going. It was there when boyhood friend D. Boon -- with whom he formed the seminal punk band the Minutemen -- died in a traffic accident in 1985. It was there when Firehose -- the trio Watt and Minutemen drummer George Hurley created a year later -- disbanded a decade ago. And it was there when Watt spent four months in bed, tubes sticking out of his body, thinking about his cat (which has since passed away). "I'm inspired these days," he says. "I'm inspired enough to write a whole opera about all this."