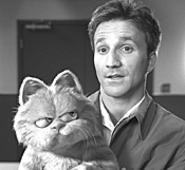 So let's get this straight: You're a much-loved comedian who just did a low-budget, multi-award-winning film with an acclaimed up-and-coming director. In recent years, thanks in part to your work with the younger, edgier filmmaking set, you're starting to be taken seriously as an actor. You even managed to score an Oscar nomination, something few might have predicted when you were on that late-night comedy show way back when.

So naturally, for your next project, you choose to be the voice of a grotesque computer-generated cat. Not just any cat, mind you, but Garfield. Y'know, based on a newspaper comic strip that hasn't been funny in two decades.

To quote the RZA, from Coffee and Cigarettes, "Damn, that don't sound too good, Bill Murray!"

Now here's the really scary part -- the movie's not that bad. Don't misunderstand, now: Every critical impulse screams that a Garfield movie has to be the worst thing ever. Even in this era of Joel Siegel and Peter Travers, no self-respecting reviewer wants to be "that guy who liked Garfield." The cartoon strip has become a metaphor for cynical overmarketing and can't even manage to sustain a compelling plot over three panels these days. Not to mention the fact that if Garfield does well, Opus, Over the Hedge, Zits, The Boondocks, and probably Peanuts are all waiting in the wings with movie deals of their own.

But it's Bill Murray. And damned if he isn't as entertaining as ever, even in an obese, furry cat body. If it weren't for him, there'd be nothing at all to the film, which forgets all conventional notions of story or characterization, and also stars Breckin Meyer and Jennifer Love Hewitt, both of whom were born to play two-dimensional caricatures of boring white people. In the film's most obvious and banal departure from its roots, Hewitt's veterinarian Liz Wilson actually finds Meyer's dorky Jon Arbuckle attractive. Yawn.

Other characters not seen in the strip for quite some time make appearances, albeit not always recognizable ones. The entire CG budget appears to have been blown on Garfield, so all the other animals are played by real live quadrupeds, who don't resemble Jim Davis's drawings in the slightest. These include slobbering mute canine sidekick Odie, dim-bulb kitten Nermal (voiced by David Eigenberg), prissy cat Arlene (Debra Messing), hipster mouse Louis (Nick Cannon), and big bad guard dog Luca (Brad Garrett). All that's missing is the presence of some of the human supporting cast, like Jon's hayseed parents and his ambiguously gay roommate Lyman.

None of which ultimately matters. The actors are mostly as disposable as the reed-thin premise, in which a low-level TV show host (Stephen Tobolowsky) kidnaps Odie after seeing that the dumb ol' dog can do some new tricks for the cameras. It's all about Murray, who plays Garfield like he's that old lounge singer from Saturday Night Live -- Murray even gets to belt out a tune or two in gloriously unself-conscious bombast. Many of his lines are so head-and-shoulders above the rest of the material that you have to imagine Murray improvised some of them. "Whaddaya say we play brain surgeon?" he says to Nermal at one point. "Would you get my power tools?" Later, watching a throng of rats retreat, he bids them farewell with "Good luck with the plague and rabies and everything!" Even obligatory pop-culture references like "You had me at hello" somehow go down easily when Murray's the one serving them up.

Though a casual filmgoer might assume that Murray is calculatingly doing Garfield for a paycheck, there's actually more to it than that. In 2-D animated form, Garfield was voiced by the late Lorenzo Music (Carlton the doorman on TV's Rhoda), who also performed the character of Peter Venkman on the late-'80s Real Ghostbusters cartoon, a character originated on the big screen by . . . Bill Murray. The thrill of having Murray return the favor comes four years too late for Music to appreciate it, but one imagines his surviving friends and family digging the karmic tribute. Murray certainly doesn't sound like he's slumming, either -- he goes all out, whether he's singing "Swing Low, Sweet Chariot" to a captive audience or veering into falsetto while taunting a pack of dogs.

In the end, the lasting appeal of the Garfield character over the years stems not only from creator Jim Davis's ability to so clearly define the traits of spoiled cats, but also from the degree to which those same traits sum up the ugly American stereotype: an overweight couch potato who does little but watch TV, eat fattening foods like lasagna, sarcastically mock his loved ones while demanding they do everything for him, and attempt to avoid the workweek ("I hate Mondays!") despite the fact that he doesn't put forth any effort anyway. We all know people like this; perhaps we even see a little of ourselves in the fat cat. So when he finally gets off the couch to face his fear and rescue Odie, in a way it's vicarious vindication for ourselves and our country.

Except that Bill Murray's way funnier than most of America.