Coat of Flesh ("Give Us Free" Records) 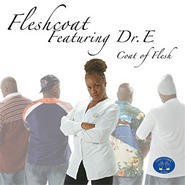 If you believe R&B has become nothing more than a sexed-up subgenre of hip-hop, turn off the radio and buy Coat of Flesh, a collaboration between Fleshcoat, a C-Town outfit whose music has appeared on several daytime soaps, and Dr. Elaine Richardson, a Penn State professor and Cleveland native with a solid set of pipes.

Coat feeds on the positivity of Richardson. Her lyrics deal with career, love, faith, and the blues. On such tracks as "Back to Work" and "I See Heaven," she digs deeper than her mainstream counterparts -- that's for sure.

Fleshcoat's jazzy touch works perfectly with Dr. E's soulful voice, especially on the funkier tunes. There are, however, a few songs with programmed beats that sound outdated. But overall, Coat of Flesh not only proves that true R&B still exists; it's alive right in our own backyard.