Flight of the Conchords

Flight of the Conchords (Sub Pop) 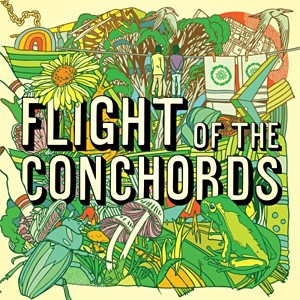 In real life, Flight of the Conchords snagged a Grammy nomination for an EP it released last year. And hipsters adore the goofy New Zealand duo. Funny thing is, on the group's HBO series, the fictional Flight of the Conchords never would have scored like this. The whole show centers on the guys' failure to book gigs (indeed — they have only one fan). But that happens when your music is filled with lyric and melodic clichés. It all makes their self-titled album an inside joke that can be somewhat off-putting to non-fans. If you've never seen the show, you might not find the humor in the Conchords' rudimentary takes on reggaeton, folk, and hip-hop. If you have seen the show, you'll be familiar with most of these songs. Either way, lines about "mother-uckers ucking with [their] shit" are still pretty funny.