Jazz flutist pops in to play with orchestra. 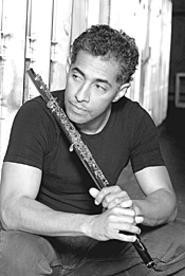 Nestor Torres realizes that the flute is a hard sell in contemporary music. Any instrument that takes a ribbing from Will Ferrell (see last year's Anchorman: The Legend of Ron Burgundy) has got its work cut out for it. "It's extremely difficult," sighs Torres. "I began doing this because of my naïveté as a kid. I chose the flute because it was different. I was curious about it, and I never thought about its practicality."

On his latest album, Sin Palabras (Without Words), the native Puerto Rican edges a little closer to mainstream audiences, incorporating some pop sounds into his usual Latin and jazz mix. "I'm perceived as a jazz musician," he says. "But my music isn't as elitist. Other jazz musicians have open hearts, but their music isn't appealing to a great majority of people. My music is more accessible."

He's expanding even more. On Friday, Torres will perform with the Cleveland Pops Orchestra. The program will feature Latin jazz spiced with classical undertones. "My music is about melody and rhythm," he says. "It's all about touching the people." Show time is at 8 p.m. at Severance Hall, 11001 Euclid Avenue. Tickets range from $20 to $62, available by calling 800-686-1141. -- Michael Gallucci

Jeffrey Landis's world is, well, out of this world. At Saturday's Cars in Space program, Landis will present NASA's idea of a car show. Specifically, he'll discuss the Sojourn and Mars Rover vehicles. "He's studying how Martian dust is affecting solar-cell power and how to prevent that from happening on future spacecraft," explains Michael Blair, NASA's aerospace lecturer. Scientist Brian Palaszewski will be there too, chronicling the history of roving machines in space. "He'll also talk about the original Lunar Rover that the Apollo astronauts used on the moon," says Blair. There will also be a photo booth that digitally puts kids in space and an activity center featuring lunar-related arts and crafts. Cars in Space runs from 10 a.m. to 3 p.m. at the NASA Glenn Visitor Center, 21000 Brookpark Road. Admission is free, but reservations are required. Call 216-433-9653 for more information. -- Cris Glaser

In 1972, John Lennon's appearance on The Mike Douglas Show went so right, it lasted a week and became a triumphant chapter in the ex-Beatle's career. A Day in His Life imagines a similar television experience, but one that goes wonderfully wrong. Tim Piper plays Lennon, who finds himself on the fictitious Doug Michaels Show. When a snowstorm prevents the program's other guests from arriving, the peacenik's band becomes the day's sole stars. Between witty interview segments, Piper and a band play Lennon and Beatles classics, including "Julia," "Revolution," and "All You Need Is Love." Piper channels Lennon at the Akron Civic Theatre (182 South Main Street in Akron) at 8 p.m. Saturday. Tickets are $19.50 to $29.50; call 330-253-2488. -- D.X. Ferris

In anticipation of National Poetry Month in April (mark your calendars now!), Vladimir Swirynsky will read and sign his latest collection, Secret Life of a Deranged Poet/Cleveland Anthology of Poets, on Saturday. The book includes a tribute to Daniel Thompson, Cuyahoga County's poet laureate, who passed away last year. Swirynsky is at Loganberry Books (13015 Larchmere Boulevard in Shaker Heights) from 1 to 3:30 p.m. Admission is free; call 216-795-9800. -- Michael Gallucci